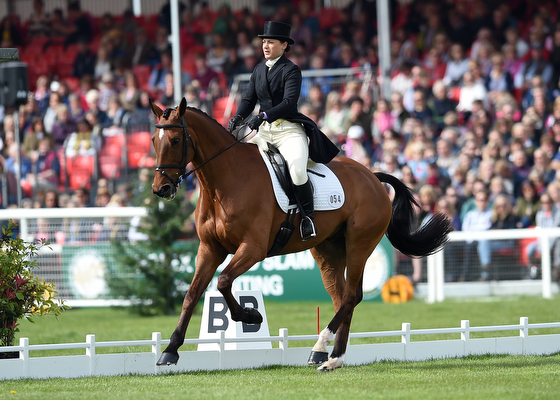 Hilly was a good boy! We scored 55.5 in the dressage at the Mitsubishi Motors Badminton Horse Trials today (5 May) and I am delighted with him.

Hilly kept his cool in a very atmospheric arena and I too vaguely kept my cool.

It is fairly terrifying having two legends of dressage commentating on your dressage performance. Of course this is THE Carl Hester and the no messing about, straight the point Pammy Hutton. I am very lucky to train with both Pammy Hutton and Gill Watson.

Gill was keeping a watchful eye on me outside though my dressage warm-up is somewhat different to most.

I simply am his best friend outside. I ask for no collection, no test movements all I do is canter out of the saddle and keep him relaxed.

This is tough for me as I would love to run through the test and practise certain movements but I have tried this before with Hilly and the more we do the more he becomes like a teenager telling them they have to be revising for his GCSE’s when they would rather be playing football outside with their friends. He quite simply throws a massive strop with me and refuses to do anything.

I canter around the main arena patting Hilly out of the saddle fully aware that I look about as ‘dressage’ as a hippo on ice skates. The bell rings. One more big pat for Hilly and off we go.

I then tell myself:

Do we go right or left at the end of the centre line? LEFT!! (I always have a last minute panic about which way we go).

We canter up the centre line and I feel my body beginning to tense.

We halt and salute. I give Hilly another pat and off we go!

Hilly felt pretty much the best he’s every felt in this phase. It sounds silly but he likes this four-star test. He did this test at Burghley and Kentucky so he knows it well. Perhaps if I can criticise myself maybe I should have pushed for more out of him today. But, and there is always a but, if I had done that maybe he wouldn’t have stayed relaxed for me. You can always look back and want more but I am truly delighted with Hilly. I think my smile said it all afterwards!

Am I nervous? Yes.

Will I sleep tonight? I will try.

Can I eat? Not really, yoghurt is always good.

I will take each jump as it comes and my main priority is Hilly. I can promise you we will do our best out there tomorrow and I would be lying if I said I didn’t feel the pressure. To me Hilly is already a one in a million horse — he has already broken a world record by starting here at Badminton and has fulfilled one of my childhood dreams.

Until next time I am trying to keep the sick bucket at bay!