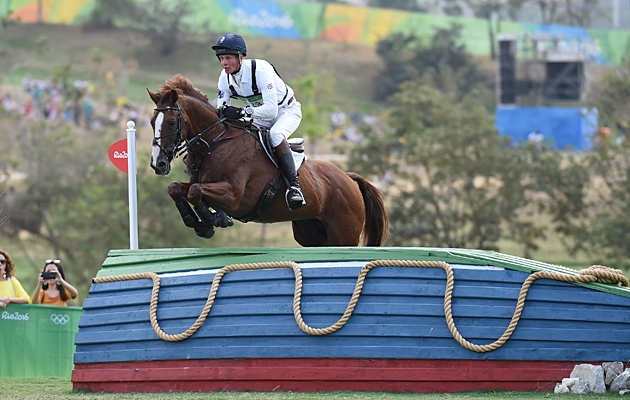 Britain is almost certainly out of the medals after problems across the board for Team GB riders during the Rio Olympics eventing cross-country today.

It was a day of drama for pretty much every nation and there were huge shake-ups in the leaderboard as Pierre Michelet’s cross-country course caused multiple problems.

William Fox-Pitt, who was in individual gold after the dressage, had a beautiful round on Chris and Lisa Stone’s Chilli Morning, but suffered 20 penalties at the the Ski Jump (fence 19ab and 20), a big drop down to two skinnies. With 10.4 time-penalties also on his score, he is still Britain’s best rider in 22nd.

“It was very obviously my fault, not the horse’s,” he said. “The horse went very well — I’m pleased with my horse, but disappointed with the result.”

William Fox-Pitt and Chilli Morning at the Rio Olympics. Picture by Peter Nixon

Pippa Funnell too went really well until right at the end of the course, when she and the late Carol Toliver’s Billy The Biz couldn’t make it to the frog which formed the final element of last water, the Amazonian Forest (fence 28, 29ab and 30).

“On a one to one I’m proud of my horse, but I’m gutted for the team and for Yogi [Breisner, performance manager] and shattered for all the connections,” she said.

Pippa is 27th with 20.4 time-faults as well as her jumping penalties.

Anchorwoman Kitty King lies 33rd after 20 jumping penalties and 33.4 time-faults with Jacqueline Owen, Diana Bown and Samantha Wilson’s Ceylor LAN. She had a run-out at the first angled brush after a step up at the Pan Am Wall combination (fence 11ab and 12), but explained her problems stemmed from dropping her whip earlier on course.

“It wasn’t a great day to drop my whip for the first time ever across country,” she said.

Pathfinder Gemma Tattersall’s and Quicklook V, owned by the Pebbles’ Syndicate, had two run-outs on course — at the log off a turn in the first water (fence 4cd) and the same angled hedge as Kitty (11b). She is 43rd with 49.6 time-faults to add to her score too.

“Unfortunately for whatever reason she went very green today,” said Gemma. “She’d never want to do anything wrong — she got a fright and I lost my steering.”

Chris Burton now holds the individual lead after a fault-free round on Santano II and the Australians also lie in the team gold medal position.

“I didn’t expect this,” said Chris. “This little horse has far exceeded our expectations. I didn’t expect him to be so fast and I’m just going to enjoy today – as for tomorrow, whatever!”

The individual medal positions are occupied by the only three riders who finished inside the cross-country time.

Michael Jung holds second with his London 2012 double gold medallist Sam FBW, but the Germans have slipped to fourth in the team standings as Ingrid Klimke (Hale Bob OLD) and Sandra Auffarth (Opgun Louvo) both had one run-out and Julia Krajewski (Samourai Du Thot) was eliminated for cumulative refusals. Sandra initially had 40 jumping penalties on her scorecard, but this was reduced to 20 as her penalties at the frog were removed.

Astier Nicolas, the first out for France, put the first fault-free round on the leaderboard and sits in individual bronze at the end of the day with Piaf De B’Neville. The French also hold team bronze.

“It’s a huge feeling to go clear, I realised the pressure I was under to do that for my team,” said Astier.

New Zealand holds the team silver position. Mark Todd, Clarke Johnstone and Jonelle Price had to deliver as their pathfinder, Tim Price, had a fall on the flat during a tight turn at the Malmesbury Cottage (fence 23 and 24). But the next three riders all scored jumping clears and Mark Todd is in individual fourth on Leonidas II, who had just two time-faults.

“We were on our minute markers all the way round and and I thought for a bit we might have done it [made the time], but the last section has jump after jump after jump,” he said.

The final horse inspection is at 8am tomorrow and at 10am all the horses who finished the cross-country and passed the trot-up go forward to the first round of showjumping, which will determine the team medals. Then the top 25 (but no more than three per nation) jump again for the individual honours.

Full 25-page report on the eventing from Rio 2016 in H&H next week — out Friday, 12 August. H&H is published on Friday instead of Thursday next week only to allow us to report the full eventing competition from the Olympics.
0 Videos