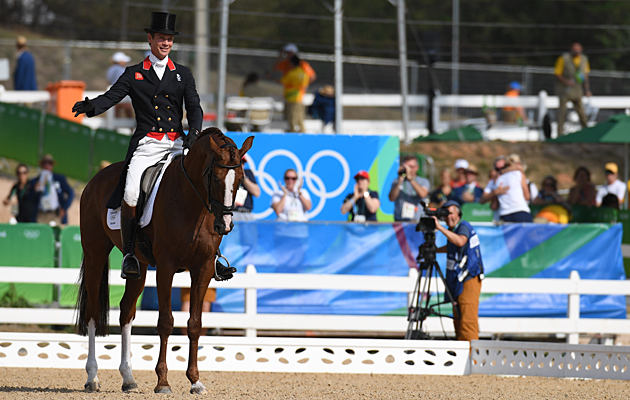 William Fox-Pitt holds the individual gold position after the first day of eventing dressage at the Rio Olympics.

The British team member rode Chris and Lisa Stone’s stallion Chilli Morning to a score of 37.

“Of course it’s what you dream of and what I was hoping for,” said William. “He’s been working brilliantly with Tracie Robinson [British eventing team dressage trainer] in the build up to coming here and we know he’s capable of a good test. I didn’t want to let him down. He felt calm and on the job.”

William Fox-Pitt and Chilli in the dressage at the Rio Olympics. Picture by Peter Nixon

William’s participation here is little short of a miracle as he suffered a serious head injury in October last year and was in an induced coma for over a week. He returned to the saddle just before Christmas, but suffered problems with memory, double vision and lost a huge amount of fitness.

“The Games has come round with perfect timing,” he said. “In November August felt a long way away and I was saying, ‘I’m going to be in Rio.’ Then you suddenly realise it’s here and I’m just ready in time. I’ve had a lot of help from UK Sport and lottery funding getting me back on track and I’m very lucky and happy to be here.”

Australia’s Chris Burton is just 0.6 of a penalty behind William with Santano II.

“I’m stoked with him — he makes my job really easy, that lovely horse,” said Chris. “Of course there are things that could be better, but that’s always the case with dressage.”

Chris Burton and Santano II at the Rio Olympics. Picture by Peter Nixon

Britain’s first rider into the arena, Gemma Tattersall on Quicklook V, is now 15th. With two riders from each team having completed their tests, Britain lies in team bronze, with Australia in silver and the Germans in gold.

“I’m very happy,” he said. “He was very good to ride and I had a good feeling. We made a mistake in the canter, but his concentration was directly back on me.”

Perhaps the biggest surprise of today was Clark Montgomery’s test on Loughan Glen for the US team. As Clark himself rued, the horse hasn’t scored out of the 30s for a long time, but he inexplicably shut down in the arena this afternoon. The pair finished the day 10th on 46.6.

“I’ve no idea what happened,” he said. “He warmed up beautifully. He felt good until he tried to walk and once he was in that frame of mind he wouldn’t get out of it.”

Full 25-page report on the eventing from Rio 2016 in H&H next week — out Friday, 12 August. H&H is published on Friday instead of Thursday next week only to allow us to report the full competition from the Olympics.
0 Videos