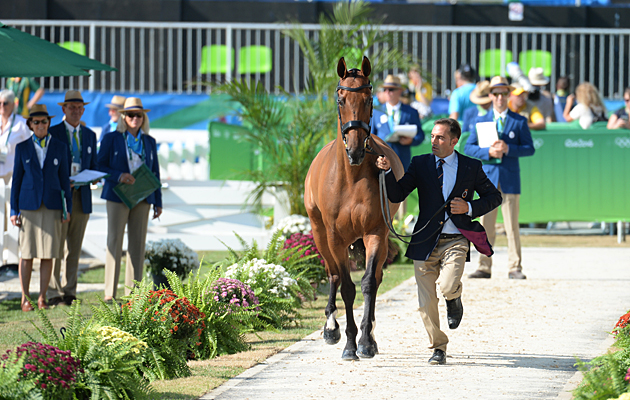 One horse was sent to the holding box at the first eventing trot-up at the Rio Olympics today (Friday, 5 August).

Spain’s Albert Hermoso Farras was asked to take Hito CP aside by the ground jury — president Marilyn Payne (USA) and members Andrew Bennie (NZL) and Sandy Phillips (GBR). But he was accepted when he re-presented.

All the other horses forward passed, so there will be 65 starters in the eventing competition. The teams with a travelling reserve trotted up that horse too, and they can be substituted until two hours before the dressage starts tomorrow morning at 10am.

A couple of horses were asked to trot twice before they were accepted. They were Nadeville Merze, ridden by Nicolas Wettstein for Ecuador, who became a little upset on the strip, and Jock Paget’s ride Clifton Lush for New Zealand.

Chinese supporters had a nervous moment as Alex Hua Tian did not bring Don Geniro forward at his allocated time before the Japanese riders, but he followed them in and passed without problems.

Viewing national uniforms is a popular spectator sport at first horse inspections and the Swedes definitely won the award for the most eye-catching outfits — look out for our gallery of pictures coming soon.

The dressage starts tomorrow at 10am (2pm British time) and continues on Sunday. Monday (8 August) is cross-country day and the competition concludes on Tuesday. Follow the dressage as it happens with H&H Live.

Such was the interest surrounding the first horse inspection the hashtag #EquestrianEventing was trending on twitter during the trot-up.

Full 25-page report on the eventing from Rio 2016 in H&H next week — out Friday, 12 August. H&H is published on Friday instead of Thursday to next week only to allow us to report the full competition from the Olympics.