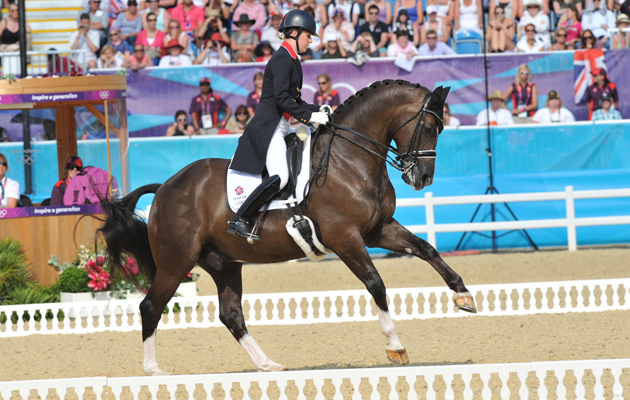 Since making its debut in Stockholm in 1912, dressage has been a firm fixture on the Olympic roster.

The three equestrian disciplines are the only Olympic sports in which men and women compete on equal terms.

There is one set of team medals and one set of individual medals in the dressage. There are 60 riders.

Teams are made of three or four riders, all of whom are also competing concurrently for individual medals. Additionally, countries that can not make a full team can send riders to compete as individuals.

The grand prix takes place over two days, on 10 and 11 August. All riders compete in this test, which serves as the first round of both the individual and team medals.

The top seven teams (including any tied for seventh place) go on to compete in the grand prix special (12 August), which is a more difficult set test than the grand prix.

Team scores from the grand prix and special tests are combined to determine the team medals, with the team with the highest score winning gold. Three of the team members’ scores count to the team’s final total, with the lowest being dropped.

The special also serves as the second round of the individual competition as the top eight riders who do not qualify as part of a team also compete.

After the team competition is concluded (medals awarded on 12 August), there are two rest days before the top 18 riders from the special move on to the third individual round, the freestyle to music, on 15 August. This test determines the individual medals. The highest score (percentage) wins.

A maximum of three riders from any one nation may progress to the freestyle.

The freestyle is choreographed by each rider, highlighting the horse’s strengths, and is set to the music of their choice. There are certain compulsory movements and many more permissible movements which may or may not be included according to the degree of difficulty chosen by the rider. A higher degree of difficulty equals greater risk but potentially greater reward, if all goes according to plan.

How does the scoring work?

Dressage scores are expressed in percentages, with the highest percentage winning.

Scores in the grand prix special are usually comparable to in the grand prix, but freestyle scores are often higher as they are marked in a different way and include strong weighting towards the inventiveness of the choreography and for the music.

If a rider makes an error of course in the grand prix or the special, two marks are deducted from each of the seven judges.

In the freestyle, judges do not know if a rider takes an unintended route.

All four riders ride on the team and as individuals.

Who are the main contenders and does Britain have a chance?

The British team will be defending their team and individual gold medals from London 2012.

Charlotte then went on to claim individual gold, with the Netherlands’ Adelinde Cornelissen (Jerich Parzival) in silver and Laura bringing home bronze with ‘Alf’.

Of that triumphant team only Charlotte and Carl are likely to ride in Rio, most probably with Valegro and Nip Tuck, a 12-year-old Don Ruto gelding Carl has brought to international prominence over the past few years, culminating in team silver WEG Normandy 2014 and another team silver at the 2015 Aachen European Championships.

The third team place is likely to go to Fiona Bigwood and 11-year-old Atterupgaards Orthilia, while the fourth place remains harder to predict.

The German and Dutch teams are always ferociously competitive, and with some of the world’s best riders — Edward Gal and Isabell Werth to name but two — with some serious horse power in their stables, the fight will well and truly be on in August.

The special Olympic dressage report will be in the issue of Horse & Hound that hits the shelves on Thursday 18 August.

We will also run a comprehensive preview in 28 July issue and a pull-out form guide in 4 August issue, which is designed for you to keep track of team and individual scores.

We will also reporting live online via www.horseandhound.co.uk — with a dedicated Rio 2016 Olympics microsite — and will keep you constantly updated through blogs, pictures, stories and social media as well as our ever-popular live interactive text service.