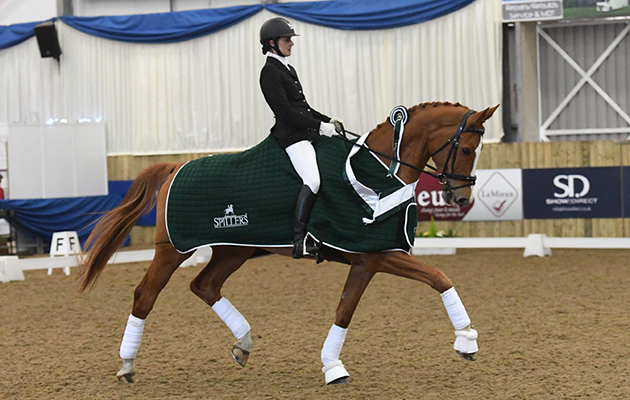 Julie bought the 17.2hh gelding by Walentino from Suzanne Davies when he was a weanling.

“He doesn’t feel that big to ride,” said Julie, who works full-time in the HR department of a law firm.

Julie Gerarghty’s other success came in the elementary open, where an emotive score she put together for Laura Wollen and Woodlander Buddy Holly received praise from the judges.

Laura and “Buddy” were summer 2015 elementary champions, and now have a further sash to add to the collection.

“He’s a nine-year-old and a bit behind,” said Laura, who is based near Hartpury.

Katie earned a shade under 70% riding the 10-year-old Rubin Star N son Riesenstern, with her partner Owen in third on the licensed stallion Don Dante (by Dancier).

At novice Marie Watson was untouchable on her six-year-old Hanoverian Lescadeur, whom she bought from Gamblethorpe Hanoverians as a foal.

“I didn’t expect to get in the prize-giving and had unplaited him,” she said.

Meanwhile, the first prize winners of the morning in the Petplan Equine Area Festival Finals were Cara Shardlow and Detonator II.

The pair scored a personal best of 67.02% to win the inter I ahead of her friend Natalie Widdowson and Gorgeous George IV, who finished less than two-percent behind on 65.48%. Tracy Wright and Kermo’s Dinaro Star came a close third on 65.22%.

Christine Cockerton and Evaldo came out on top in the elementary open, which had 58 entries, with a score of 70.75%.

In close second were Laura Hedley-Gray and Dutch on 70.46%, with Natalie McGoldrick and Chiko II in third on 68.39%.

Twenty-year-old Chloe Hunter and Daylight were the only combination to break the 70% barrier in the advanced medium, winning on 73.28%.

Second place went to Jess Bennett on JB Dukaat with a score of 69.02%. Beth Barnett and Zantino II were third with 68.97%.

For a full report from the British Dressage winter championships and the Area Festival final — as well as news, views and expert comment — pick up a copy of Horse & Hound magazine next Thursday (14 April).