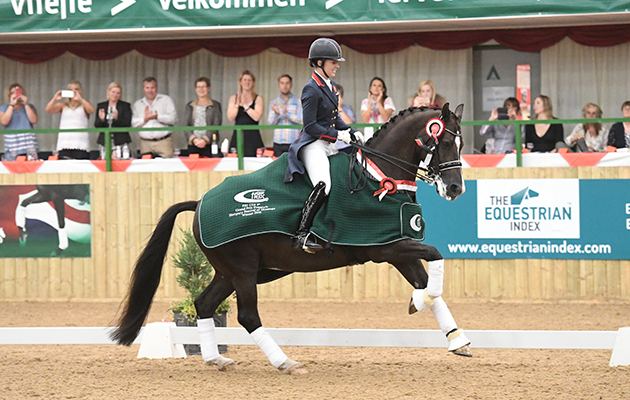 Charlotte Dujardin and Valegro announced their return to the competition arena in triumphant style, winning both the grand prix and the freestyle to music at Hartpury Festival of Dressage in Gloucestershire (6-10 July).

They topped Friday’s grand prix with 83.28% despite two mistakes and went on to lead the charge in the freestyle from the final draw.

It was the first time the pair had ridden through their new music, which was put together by Tom Hunt. It featured carnival-style music, which is very fitting for their upcoming trip to the Rio Olympics.

Every judge awarded at lest 90% for the artistic marks, with three of them giving 95%. The flying changes were exquisite. Their overall score was 90.63%

“He was excited to be in there,” said Charlotte, who before this show had not competed Valegro since winning gold at the European Championships in Aachen, Germany, a year ago.

“He was so fresh here, but that’s how we want him at this point.”

Henriette Andersen rode a blinder on Warlocks Charm for second place in the freestyle, logging 73.85% with the Jazz son. He showed better piaffe than he has in the past and looked fit and well.

Roland Tong, who rides for Ireland, filled third place with Rybrook Ambience, half a percent behind. The piaffe was nicely base-closed and the passage energetic, but the hindlegs were not even in the flying changes.

Steph Croxford’s Mr Hyde was his usual exuberant self. The pair showcased their new routine, in which the degree of difficulty just keeps ramping up.

Carl Hester will ride Nip Tuck in tomorrow’s grand prix special. He and the massive Don Ruto gelding posted a personal best in the grand prix test on Friday, so the locally-based rider will be hoping for another confidence-building performance ahead of Rio, particularly as scores from both the grand prix and the special count towards the team result at the Olympics.