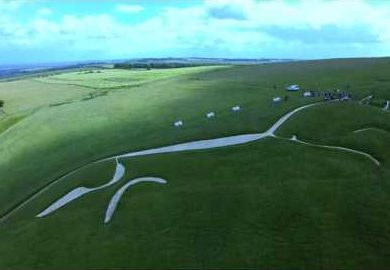 Anyone who owns a grey horse knows all about the hours spent keeping it clean – and about chalking white socks. Imagine how much harder it would be if the horse was 360ft long.

Yet this is what an army of volunteers have been doing to the Uffington White Horse, a world-famous landmark on the Berkshire Downs.

To keep the White Horse looking snowy, the 3,000 year-old horse is re-chalked once or twice a year. Around 300 volunteers from the local community and from further afield come to help each time.

It consists of scouring the weeds (usually done in advance by the ranger team) then re-chalking using chalk from a nearby quarry. The volunteers pound the chunks of chalk into powder with mallets to form a new chalk crust within the outlines of the figure. If the work wasn’t done, the horse would become overgrown with weeds and disappear.

Over the centuries, the annual re-chalking of the White Horse became a well-known, large-scale public event until it was banned after the 1857 gathering when it attracted more than 30,000 visitors and travellers, many of whom were reluctant to move on.

A former vet has caused controversy by saying the famous white horse in Uffington could in fact be a dog.

National Trust ranger Andy Foley said:  “This is a great opportunity for people to provide real hands-on help in looking after our local heritage.  It’s quite a spectacle even for those who aren’t actually pounding the chalk, so we love as many people as possible to come along and join the fun. We’re very grateful to the volunteers, as we’d never be able to get the work done without them.”

The White Horse is thought to date from the Iron Age (800BC-AD100) or the late Bronze Age (1,000-700 BC).  It is by far the oldest of the white horse figures in Britain; many of the others are in Wiltshire, including the Westbury White Horse, the Cherhill White Horse and the Osmington White Horse.