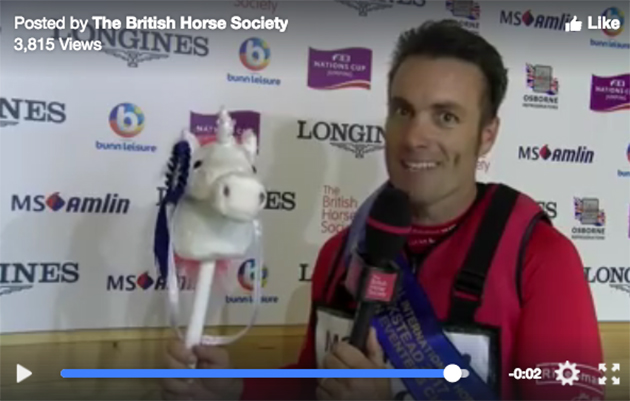 Showjumpers, eventers and show horses aren’t the only equines proving a hit at this year’s Royal International Horse Show (RIHS).

The British Horse Society’s (BHS) hobby horses have been spreading the word about the charity’s Ride Safe Award, which was launched this month.

The hobby horses have been used for demos on the new educational scheme that educates riders on how to protect themselves on the road and elsewhere.

Many riders have been visiting the BHS’s horses, including four-star event rider Paul Tapner, who won the eventers’ challenge at the RIHS on Thursday (27 July).

“The hobby horses are hit!” a BHS spokesman told H&H. “We’ve even had one of them interviewing Paul…”

Paul had a chat with the hobby horse Magic after his win with Bonza King of Rouges (King).

Magic agreed and told Paul that he had been lucky enough to meet King. “He’s a cool dude horse, he’s grey just like you,” Paul said, to which Magic “replied”: “Well grey’s the best colour!”

The manufacturer of the broken bit got in

Plenty of thrills and spills in today's eventers

There has been a 29% increase in accidents

The BHS stand is situated behind the Derby Bank and will be at Hickstead for the duration of the RIHS (25-30 July).