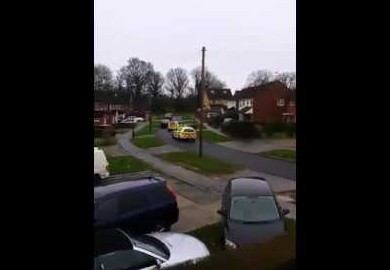 A loose Shetland was on the run for more than an hour before being captured by West Sussex Police on Sunday (24 January).

The pony was spotted trotting along the road in several locations in the Crawley area.

Police were notified and it took officers two attempts to capture the escaped pony.

“At about 1.45pm, police received reports of a Shetland pony on the loose on Balcombe Road, Crawley,” said a Sussex Police spokesman.

“Minutes later, witnesses reported seeing a pony ‘believed to be the same animal’ travelling on Crawley Avenue towards Hazelwick Roundabout.

“Police received further reports of the pony on Gatwick Road, Manor Royal, London Road and Langley Drive, and it was contained behind the Crowne Plaza, before making off again.”

The pony was eventually captured using ropes in the garden of a property in Short Close at 2.46pm.

“Police would like to thank everyone involved for their help in locating and securing the pony, who was taken to a nearby yard,” added the spokesman.

Officers contacted the RSPCA to help trace the owners of the pony.

H&H is awaiting a comment from the charity and will publish further details as soon as they are available.

Anyone with any information about the pony should contact police by emailing 101@sussex.pnn.police.uk or calling 101, quoting serial 693 of 24/01.

The bay pony was spotted at 1.20pm cavorting around the airfield.

“We are the busiest general aviation airport in the country so there were lots of planes flying around,” said the airport’s operations director Darren Lewington.

The escaped pony was “having a fantastic time” galloping about on the 400-acre airfield.

The airport’s fire crew and operations staff were called out to corral the pony and air traffic control staff were forced to delay landings as he got nearer to the runway.

“We eventually managed to coax him through a copse on the boundary where his owners were there to meet him and take him back to the farm,” added Mr Lewington.