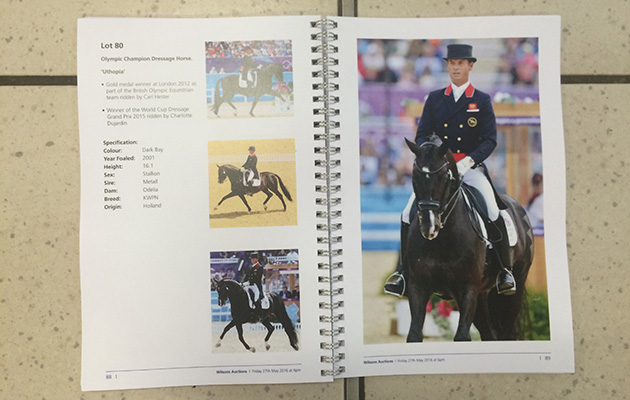 Rumours have been reverberating around the equestrian community as to the identity of the new owner of Uthopia, Carl Hester’s team gold medal winning ride at the London 2012 Olympics, since the stallion was sold for £165,000 at auction yesterday (Friday 27 April).

However, H&H can reveal that suggestions the new owner is Paul Schockemöhle’s Gestut Lewitz stud are unfounded.

An H&H source confirmed with the German stud’s manager, Christoph Hinkel, that they are not the new owners of Uthopia.

Among those commenting on the rumour that the horse might have been sold to the stud was British-based classical riding specialist and founder of Enlightened Equitation, Heather Moffett, who posted her views on her personal, but publicly available, Facebook profile shortly after the sale last night (Friday, 27 May). Her post was then shared and commented upon by numerous Facebook users.

However, Paul’s stud manager Christoph Hinkel has stated today (Saturday 28 May) that the stud has not purchased the horse.

Many on social media assumed that Uthopia would be a positive addition to Schockemöhle’s stud, who stands Uthopia’s 22-year-old sire, Metall — along with other high-profile dressage stallions such as Sandro Hit, San Amour, Sir Donnerhall and Fürstenball. They also hold an impressive book of jumping stallions, headed by Diarado and Balou Du Rouet.

Schockemöhle is also the part-owner of the ill-fated Totilas after purchasing him for an undisclosed amount — said to be multiple millions — from his former Dutch owners in 2010.

Heather has since clarified on the unofficial British Dressage Facebook page that she “categorically” does not know who has bought the horse and that screenshots taken of her original post without her permission were “an invasion of my own privacy”.

This is not the first time Heather, a classical dressage rider and trainer, has found herself in hot water for her social media posts.

She made critical comments after Anna Ross and her ride Die Callas were eliminated when the mare bit her tongue, drawing blood, in the vet check following a plus-70% grand prix ride. Heather later admitted that she had misunderstood the circumstances of the incident and issued a public apology.

She has now made her personal Facebook page private, adding: “My page [is] no longer public. Friends only. You live and learn”.