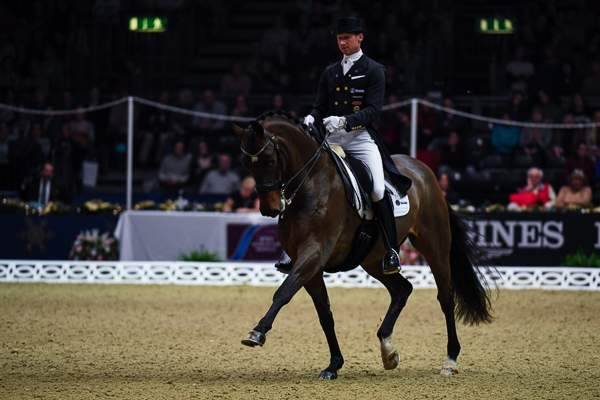 Patrik and the classy 11-year-old “Dude”, by Dr Doolittle, performed a faultless test with an exceptionally high degree of difficulty, helping them go one better than their second-place grand prix finish the previous night.

“He felt amazing and tried his heart out in there. He just wants to please and do his best,” said Patrik, for whom it was an emotional win having returned to the show after 13 years.

Britain’s Emile Faurie was astounded to finish an agonisingly close second behind Patrik in what was his first ever grand prix freestyle on the De Niro breeding stallion Delatio (below).

This horse is extremely exciting for the future, demonstrating great scope and power, coupled with an impressively relaxed attitude. Their fault-free test left them just 0.2% behind Patrik with 80.4%.

“I played it safe in the grand prix last night as I still don’t know him very well,” said Emile, who has only had the ride on Elena’s Knyaginicheva’s 13-year-old for three months. “He’s just such a trier – a really awesome horse who just wants to do it all. The quality speaks for itself and his concentration is incredible. I think there’s a few more percent in there.”

“Today he was a little more tense than yesterday and wondering what was happening in there with the music so loud. But he tried his best and he’s only a nine-year-old so what can you expect,” said Edward.

Edward Gal takes the Olympia grand prix honours on an upcoming star, while Emile Faurie finishes top of the British

Charlotte Dujardin and Carl Hester may not have been competing at Olympia 2017, but they captivated the crowds with their

To help you get the most out of your shopping experience at Olympia this year, H&H’s products editor has hunted

Fellow Dutch rider Madeleine Witte-Vrees slotted into fourth with Cennin, just edging ahead of Britain’s Lara Butler, debuting a new freestyle with Rubin Al Asad. They posted 76.98% with a fantastic performance to a Dire Straits soundtrack to finish fifth.