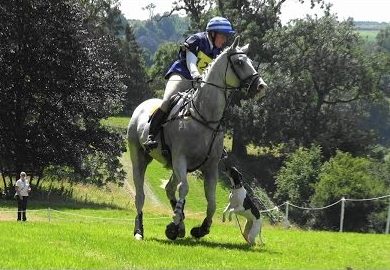 A four-star event rider has expressed her frustration after being chased by a dog on the cross-country at Gatcombe (see video, above, by Harveywetdog).

Olivia Wilmot was riding Zebedee De Foja in the advanced section at the Festival of British Eventing on Friday (5 August) when the incident occurred.

The pair had reached the end of a galloping stretch and were approaching fence 17 when a dog ran under the string.

The loose animal ran up to Zebedee, biting his tail.

Olivia managed to pull up her horse and the dog was eventually caught.

“As I was approaching the fence I could hear people shouting and saw this dog trying to jump up at me — he still had his lead attached.”

After the dog was caught, Olivia was able to complete her round and went on to finish seventh.

“Luckily my horse was very well behaved, he didn’t kick out or do anything,” she said.

“But he lost his concentration and I had to jump the long route of the next fences.

“It’s not acceptable at that level, as a rider it’s something you shouldn’t have to deal with.

“There are enough things for riders to focus on eventing, without having loose dogs to deal with as well.”

Tim Henson, Festival of British Eventing event director, reminded visitors, officials and competitors that dogs should be kept securely on a lead at all times.

“We state this on every admission ticket, on various signs located around the event and our commentators reinforce this advice during the day,” he said.

“It is most unfortunate that on this occasion a dog became loose on the cross country course.

“We immediately asked our commentators to emphasise the message more strongly as it is extremely important to us that horse and rider combinations are safe.”

A BE spokesman added: “It is the responsibility of the owner to keep their dog on a lead and under control at all times and in addition some events have implemented additional policies, for example fining owners should dogs be found off a lead.”