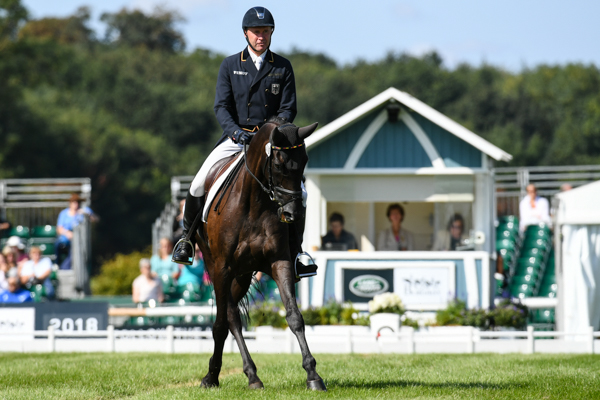 Oliver Townend is still sitting pretty at the top of the dressage leaderboard at the Land Rover Burghley Horse Trials after the morning session of competition on day two.

Oliver, who was first into the arena yesterday (30 August), on MHS King Joules, is just 0.1 of a penalty ahead of Sarah Bullimore and Reve Du Rouet, who scored 27.3 yesterday afternoon.

Germany’s Andreas Dibowski has slotted into third this morning riding FRH Butts Avedon (pictured), on a score of 28.5.

“I’m very, very happy with my horse’s performance,” said Andreas. “The atmosphere in there makes it not so easy to ride and my horse was crazy and nervous at the trot-up on Wednesday so this is a good result. I only spent 10 minutes warming up outside and took him for a gallop in my jumping saddle this morning to help keep him calm.”

Oliver Townend’s second of three rides, Cooley SRS, has moved into fourth place on a score of 29.4.

“He was very good in there — it’s only his second time competing at this level,” explained Oliver, who will ride his third and final horse this afternoon, last year’s winner, Ballaghmor Class. “Cooley SRS is as fit as I’ve ever had him and he was a little excited earlier this morning to say the least. He’s a naturally weak and backwards horse, but I’m happy with his progression and there’s a lot more to come.”

Harry Meade has now moved down to fifth on Away Cruising, while Piggy French (Vanir Kamira) and Georgie Spence (Wii Limbo) now lie in sixth and seventh place respectively.

Other notable performances this morning came from Alexander Bragg (Zagreb) and Emilie Chandler (Coopers Law). They sit in equal ninth place on 31.

“I was a little disappointed with my test,” said Alex. “The start was great and then I became cautious in the canter so lost the higher marks. I’m really proud of my horse though, as he did everything I wanted him to.”

Emilie was delighted with her horse’s performance.

“I’m so pleased. He was very relaxed and managed to contain himself in the walk. We had a big breakthrough in his way of going at Badminton where he was much more rideable.”

The afternoon session of dressage recommences at 2pm.