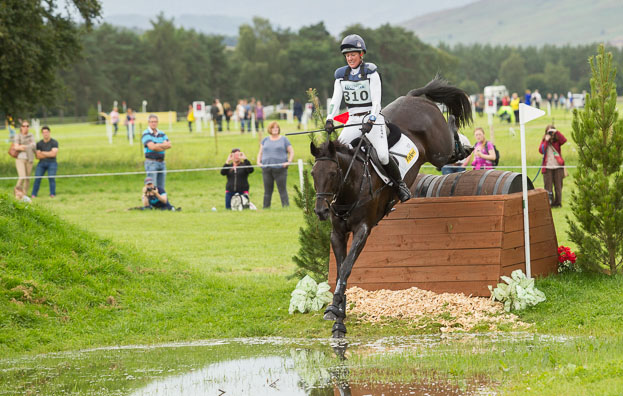 Nicola Wilson leads the CCI3* at the Blair Castle Equi-Trek International Horse Trials after the cross-country.

The British rider held her dressage lead with her parents Mary and Barry Tweddle’s Annie Clover despite adding 8.4 time-faults over Alec Lochore’s track. She is still 4.3 penalties ahead of her nearest rival, so will have a fence in hand going into tomorrow’s showjumping.

“She was super. It was never my goal to make the time with her today, though I thought we might be a bit quicker than we were,” she said. “Annie Clover got a bit stronger the further we went around the course, which was probably due to a lack of prep runs — she hasn’t run since Burgham [a month ago] — but it’s a nice problem to have.”

Oliver Townend has moved up from third to second aboard ODT Ghareeb courtesy of recording just two time-penalties today. He also holds third on Lanfranco — up from fourth after dressage and the only horse to beat the clock across country.

Louise Harwood was second after dressage with Jenga III, but she had 20 jumping penalties at the Bruadar Bothys (fence 15abc), three houses on a curving left-hand line, concluding with a skinny.

Eight of the 10 starters completed in the CCI3*. Emily Parker retired Harelaw Wizard, who became tangled up with the string and the fence judge’s chair when taking the long route at the TopSpec corners (fence 10ab). She continued, but pulled up after some issues at the final water, Malcolm’s Forth Road Bridge (fences 19 and 20ab).

Elizabeth Power was fifth after dressage on Soladoun, recently third in the British open at Gatcombe, but retired after an early run-out at the triple brush arrowhead at the Horse Sport Ireland combination (fences 4 and 5ab).

Only three of the 23 starters made the time in the CCI2* and they landed the top three places overnight. Caroline Clarke, 21, moved up to take the lead from fifth after dressage with her own Imperial Heights nine-year-old Touch Too Much.

“I’m astonished to be leading,” she said. “I was held on course at the third last and when I finished they said I’d had 24 time-faults, but I knew that couldn’t be right as I was on my minute markers all the way round, so that was a bit traumatic. But I’m absolutely thrilled with him.

“I was worried about the corners [Topspec corners, fence 10ab] because they were on three-and-a-half strides and everyone was saying they were going on three, but he’s a little pony type. He shuffled in four strides and that was fine.”

Emily Young-Jamieson was the dressage leader in this class on Gortmore Tommy T, but she was eliminated at the first of the AutoEcosse angled brushes at fences 26ab.

Jonelle Price made it three female riders at the top of the three CCI classes after cross-country by holding her lead in the CCI* on seven-year-old OBOS Impressive. The top 10 horses in this class after dressage were all fault-free across country.

“She’s quite experienced to be doing a one-star as she is doing it to tick a box for Lion [the seven-year-old World Championships],” said Jonelle. “It felt quite straightforward and she made light work of it.”

Full report from Blair Castle in H&H next week, out 1 September.
0 Videos