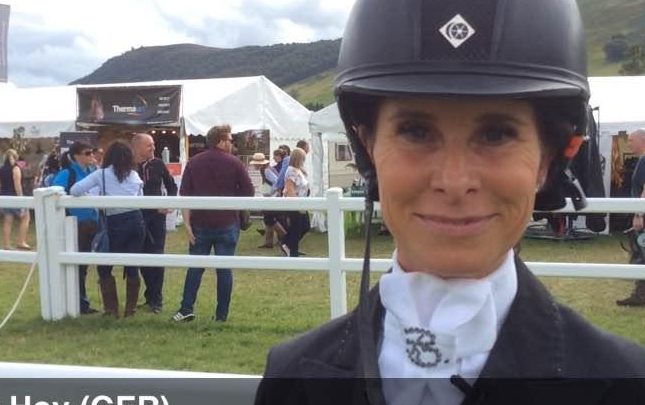 The German rider was the only person to score in the 30s, recording a mark of 34.6 with her own Seigneur Medicott. A number of horses were upset by the fact the horses in the CCI* were running cross-country around the edge of the warm-up, but Bettina’s 10-year-old performed brilliantly.

“He is beautiful to ride — what he does outside, he does inside too. He’s not affected by the atmosphere,” she said. “He’s a real gentleman; if he was a man I’d like to marry him.

“I saw other horses getting affected by the atmosphere — with the cross-country running it can take their concentration in the warm-up and sometimes you pay for it in there, but he was really concentrating.”

Jonelle Price lies third for New Zealand on Cloud Dancer II, who belongs to The Marley and Me Syndicate. The dressage-bred nine-year-old (San Remo x Sandro Hit) was a little more tense today than normal and jogged in the walk.

“He moves beautifully and is built for the job, but we’re a few marks adrift of where I’d like to have been,” she acknowledged. “He’s very fit and it’s the first time ever he’s not walked reliably, but I hope that’ll pay dividends tomorrow [on the hilly cross-country].

“On the one hand I’m disappointed, but on the other, I’m proud he showed some pizazz today and hope he’ll think of that when he’s digging up that hill tomorrow.”

Tom McEwen is fourth on his former Bramham under-25 winner Diesel (44.5), with Chris Burton fifth for Australia (46.8) riding Polystar I.

Among those who were disappointed were fellow Aussies Bill Levett, who had been trying to settle Shannondale Titan all week but found him still “too lit up” for 49.7 and 11th, and Paul Tapner, who holds 10th on 49.1 with the veteran grey Kilronan. Paul is the ERM series leader going into this event.

“He never put a foot wrong and on the last two movements I told myself to concentrate as I thought I’d nailed it, but the judges didn’t agree,” he said.

Full report from Blair Castle in H&H next week, out 1 September.