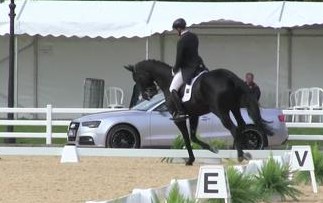 Michael Eilberg rode the expressive Half Moon Dynasty to head the inter II championship on the opening day of the LeMieux National Dressage Championships. The Dimaggio mare, who made her inter II debut in July this year, posted just shy of 70% to clinch the title over Pippa Hutton and Duela.

“For the past year we’ve been working on the grand prix movements and she wasn’t ready until Hartpury Premier League. She went really well there so it seemed silly not to bring her here,” said a delighted Michael.

“It was a very long wait until the end,” said Alice, who was bubbling over with joy at this horse’s superb performance. “If someone had told me a year ago that he would come here this year and win the PSG, I wouldn’t have believed them.”

Two Keystone horses featured in the top three of the advanced medium restricted, with Sadie Smith taking the honours on the eight-year-old Keystone Dynamite, in the pair’s first year at the level.

Diane Thurman-Baker and Highcliffe Apollo – who demonstrated his eye-catching Spanish walk in the prize-giving – split Sadie and Debbie Poynter riding Keystone For Real.

Ashley Jenkins took the elementary restricted championship with the British-bred Salsa Hit, being the only combination in the class to break the 70% barrier.

“He is the smallest horse on the yard but the biggest character,” said Ashley, of the Samba Hit II six-year-old, who is the first horse he has owned.

Karen Frankum claimed the hotly contested prelim title, having only taken up affiliated dressage with Wizard VI in March this year. They posted 72.37% to pip Elijah Lovell and Sheepcote Lets Go to the top spot.

“He’s a very sensitive horse, who doesn’t like other people, and he felt very intimidated yesterday in the warm-up with the horses coming towards him. As a result we decided not to do the arena walk today and he was very relaxed in the test.

Among tomorrow’s highlights will be the Saracen Horse Feeds inter I championship, featuring Michael Eilberg and Woodlander Farouche. See www.horseandhound.co.uk tomorrow for footage of Farouche’s test.