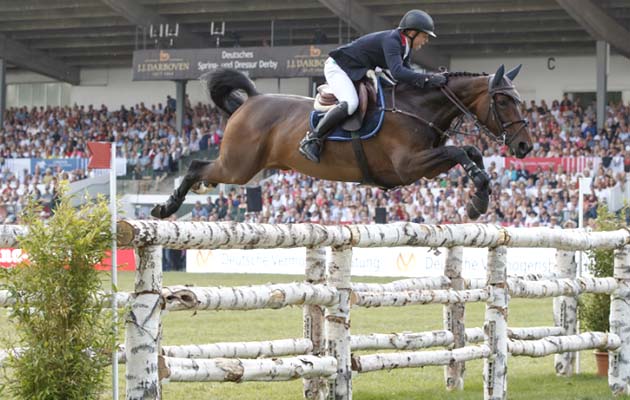 Singing showjumper Matthew Sampson is eyeing Hickstead glory after his brilliant victory in the Hamburg Derby.

The 28-year-old, who famously crooned his way to Bolesworth last year, was the only rider to jump double clear in the class at the German show on 13 May aboard Gloria van Zuuthoeve.

Matthew won the British Speed Derby at Hickstead last year with Topflight True Carlo and will return to the meeting (21-24 June) with the aim of retaining his title and adding the Al Shira’aa Derby to his list of wins.

“Hamburg was the first time I’ve jumped in a derby, so I had a bit of luck on my side,” said Matthew.

“It was a great warm-up for Hickstead and it would be great to do well again there in a few weeks’ time.

“Hickstead is a very different course to Hamburg and not many horses have done well at both, but winning the class has really upped our confidence.”

The British Speed Derby takes place on 23 June this year, the Derby the following day.

The last rider to win the Speed Derby and Derby at Hickstead in the same year was Olympic gold medallist Ben Maher, who did the double in 2005.

Ireland’s Eddie Macken was the last rider to win both the Hamburg and Hickstead derbies in the same year, achieving the feat in 1976 and 1978.

Watch the hilarious videos of Matt Sampson singing his heart out

The Hamburg Derby dates back to 1920 and inspired Hickstead founder Douglas Bunn to create a similar class in England.

After watching video footage of the Hamburg class, he visited the German showground to inspect the course.

Douglas arrived during a snowstorm on New Year’s Eve, and went round the showground measuring fences — much to the bemusement of the show’s officials. The layer of snow on top of the Hamburg bank must have affected Douglas’s measurements, as Hickstead’s bank stands 6in taller than its German counterpart.

The first Hickstead Derby took place in 1961 — featuring fences such as the Devil’s Dyke and the fearsome 10ft 6in Derby Bank — and the course has remained the same ever since.

Some of the biggest names in showjumping have won the class, including David Broome, John Whitaker and Marion Mould, all three of whom have also won the Hamburg Derby.