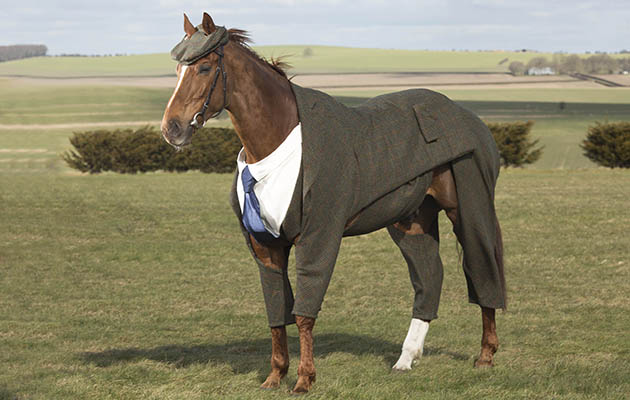 Tweed is popular attire among racegoers, particularly during Cheltenham Festival, which kicks off tomorrow (Tuesday 15 March). But did you ever think you would see a horse dressed in a three-piece suit?

To celebrate the start of the four-day showcase at the Gloucestershire racecourse, a bespoke Harris Tweed equine masterpiece was created — the first of its kind in the world.

Modelled by the Brendan Powell-trained veteran Morestead, the pièce de résistance was unveiled by 20-time champion jockey AP McCoy — who was also kitted out in tweed for the occasion.

“I have many fond memories of racing at the Festival among the sea of tweed-wearing racegoers,” remarked AP. “I’ll be watching from the side-lines for the first time this year and rather than strapping on my jockey silks, I’ll be joining the punters and hopefully tipping a few winners.”

Former Alexander McQueen apprentice, Emma Sandham-King, was tasked with creating the custom-made suit. It took four weeks to create and comprises 18 metres of Harris Tweed — 10 times as much fabric as an equivalent human outfit.

“Creating the world’s first tweed suit for a horse has been one of the biggest challenges that I have faced in my career as a designer,” said Emma. “Some models can be real divas, but Morestead was calm and a pleasure to work with. Tweed is undergoing a massive revival and this year’s Cheltenham Festival we expect to see the most tweed worn since the 1960s.”

Statistics have revealed that the most popular tweed item among male racegoers at the Festival was a tweed jacket with one in three men — that’s 31% — selecting it as their attire. Among the female racing fans, 28% of ladies opted for a tweed coat when at Prestbury Park.

So as if we didn’t already know, the stats show it’s not about the fascinators and stilettos when it comes to jump racing — it’s all about the tweed.