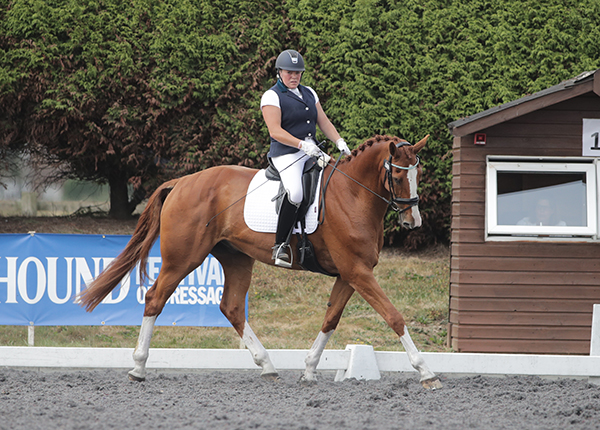 The pair won the first championship test on a score of 69.14%, before bettering their mark to take the second test on 69.85% and establishing themselves as the clear winners.

“It’s been a lovely weekend, we came on Friday and did the warm-up classes too and everyone has been really friendly,” said Lesley.

“Apart from a little blip in the music on Saturday night, he has been brilliant and really consistent all weekend.”

The eye-catching son of Furst Nymphenburg took against the hog roast and the letter “P” in the elementary music class on Saturday evening, but more than redeemed himself with his performances in the championship classes.

“He is normally really easy [to ride] and is a real sweetheart, so soft and gentle,” added Lesley, who bought him as a rising five-year-old from Gamblethorpe Hanoverians.

“He is absolutely lovely in the stable as well — he’s everybody’s friend and is right at the bottom of the herd pecking order in whichever field he is turned out in!”

While Lesley ended up coming on her own after accidents, work commitments and injury ruled out her companions from the north east, her family have been watching her tests from afar.

“My mam’s been watching on the livestream,” she added.

“Me, the horse and the dog are permanentely on a little road trip — we love Sheepgate and often come and do their three-day shows.”