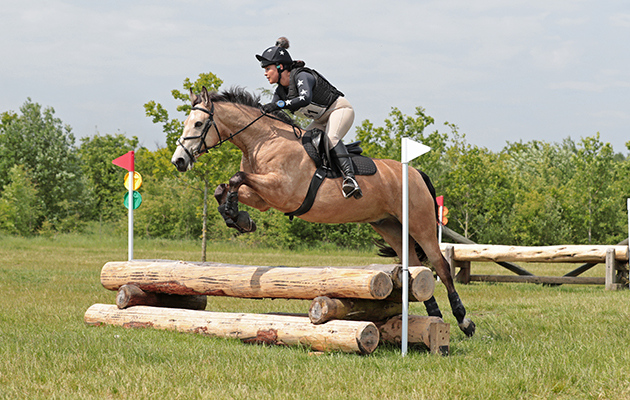 Louise Bergicourt-Toolan put in a polished performance on cross-country day of the H&H Festival of Eventing, run in association with KBIS, to become the new leader of the 70cm class.

Riding Melanie Gatt’s six-year-old Connemara x thoroughbred, Woodfield Gold, Louise stopped the clock just one second over the six-minute optimum time, to add 0.4 penalties to a strong dressage score of 28.25 which saw them fourth after the first phase.

“I’m so happy with ‘Phoenix’, he was so relaxed and took everything in his stride,” said Louise, a single mum who helps run a riding school near Richmond Park in south-west London. “It’s our first eventing competition together and his first ever so I wasn’t sure how he would cope, but he flew.”

The 15.2hh dun arrived in Louise’s riding school two years ago and has spent most of his time teaching novice riders.

“Then one day we went cross-country schooling and realised that Phoenix had a real talent for it.”

Louise said she is in disbelief that Phoenix and her are in pole position.

“I honestly can’t believe it — we came here to have a nice time with friends and to give Phoneix a good experience,” said Louise. “I’m quietly confident about our chances tomorrow as he enjoys showjumping. To be honest even if we have a fence down, I will still be over the moon with him — all of this is a bonus.”

Louise’s nearest rival is 11-year-old Frankie Fox and Rookwood Dundoolie who sit 3.1 penalties behind in second on 31.75, while last year’s 70cm winner Sally Pidsley and Tranwheal Tineth Moon is in third on 32.25.