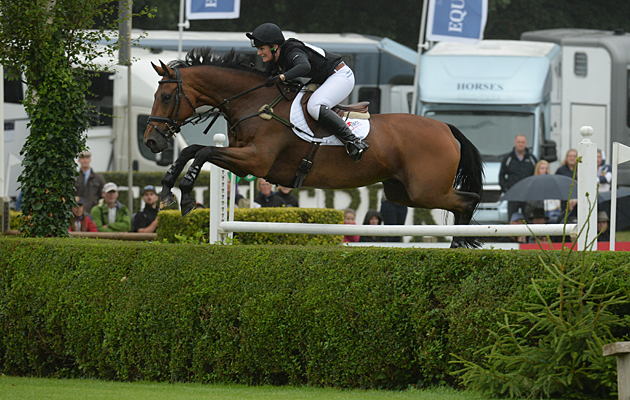 Elizabeth Power piloted Doonaveeragh O One to victory in the Amlin Plus Eventers Challenge at the Longines Royal International Horse Show today (28 July).

The Irish combination’s fast but smooth clear pipped Kiwi Tim Price and The Precious One by 0.85 of a second. Laura Collett and Mr Bass finished third.

This was 15-year-old Doonaveeragh O One’s fourth attempt at the class. He and Elizabeth finished second here last year. The horse has also finished third in this class twice — including with Elizabeth’s Grand National-winning brother Robbie.

“People think that because we share the horse, anyone can get on him. But we’re the only two who can get a bridle on him and it took me half-an-hour to get him over the bridge out of the car park today. He’s quirky, but we let him be who he is because he always delivers,” said Elizabeth, who rode Doonaveeragh O One to 10th place in last month’s Equestrian.com Derby.

Doonaveeragh O One was one of only two horses from 22 starters to leave every fence standing. The other was Dan Jocelyn’s Blackthorn Cruise, who was first to enter the arena and set the time to beat. The pair held on to the lead for two-thirds of the class and finished eventual sixth.

“It’s a very open arena and you have to be clever not to get dragged out in places,” explained Elizabeth. “You need to be as quick as you can moving forwards and do the shortest line possible. He’s got such a massive stride and I knew that after the Derby bank I could open up around the ditch and the Irish bank. There was a lot of room to really utilise his gallop.”

Tim has partnered The Precious One, a former ride of Jayne Doherty, for 10 weeks.

“He arrived Chatsworth weekend, so I haven’t had him that long,” said Tim. “But he’s a fast little horse and I used that to his advantage.”

The duo were the quickest around the 19-fence track, which is a mixed course of showjumps and cross-country obstacles in Hickstead’s international arena.

However, each dislodged pole results in a four-second penalty and their undoing was the first part of the second road crossing, which fell two from home.