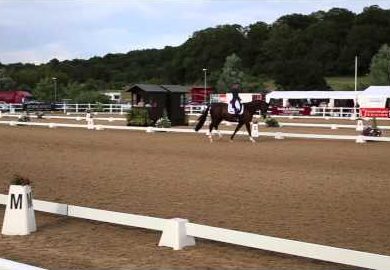 Not everyone will be able to watch the lucky riders selected to represent Britain at the Rio 2016 Olympics later this summer, but British dressage fans will have the chance to see the record-breaking combination of Charlotte Dujardin and Valegro before the Games.

They are set to perform on home soil at the Hartpury Festival of Dressage, at Hartpury College, Glos (6-10 July). The show is a combination of the venue’s Premier League and CDI fixtures.

Valegro often visits the college to use the on-site hydrotherapy water treadmill as part of his exercise regime.

“We’re so lucky to have a facility like this so close by and it’s such a super show,” said Charlotte. “We look forward to it every year and the people behind the scenes here are incredible.”

Carl and Charlotte both rode in last year’s festival, with Valegro topping the grand prix with 85.44% (see video top) and going on to score a massive 87.76% in the grand prix special.

They were in striking distance of their own world record in the special test, 88.022%, which was set at Hagen CDI, Germany, in April 2012.

Carl was the runner-up to Charlotte on Nip Tuck at the 2015 Hartpury Festival, going on to head the freestyle with over 80%.

Phillip Cheetham, equine director at Hartpury College, said: “We are thrilled that Charlotte and Carl and their phenomenal horses are making the Hartpury Festival of Dressage such a key part of their build-up to Rio.”