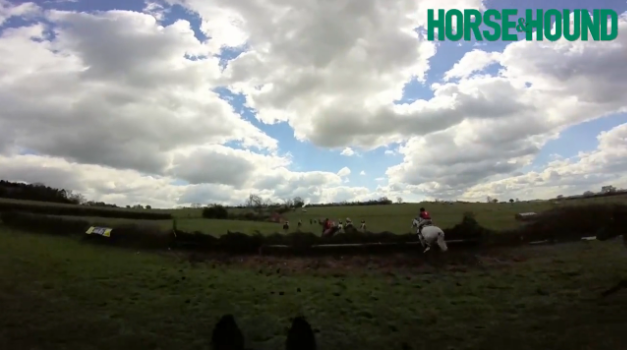 “It’s brilliant to be back,” said Dom who broke his fibia and tibia when kicked out hunting in October. “I wasn’t fully back in action until mid January so I’m just delighted.”

There were 30 starters taking part in the open class that was run over 2 ½ miles of grassland with 20 hedges to jump across the Bicester Hunt with Whaddon Chase country.

Organiser Lucy Holland was “thrilled” with the way the new event had gone. “It’s been a super day and we are so grateful to the landowners, sponsors and all those who gave up their time to help make this work so well,” said Lucy.

“We are already planning to run it again next year in order that we make it an annual event, so hopefully we can continue to build on the success of today,” she continued.

Winner Dom Gwyn-Jones, who is a former victor of the Golden Button and been placed twice behind renowned hunt race specialist Zoe Gibson in the Melton and Harborough rides, was quick to praise the organisers of the new course.

“The hunt ride fraternity massively welcomes new events and full credit to Lucy Holland and her team for getting it off the ground and also for encouraging new people to take part — for many this would have been their first ever hunt ride.”

In addition to the open event, there was also a Foxhunters class run over the same course but set on a bogey time.

The winner of the Foxhunters was Hannah Fitzpatrick, with Tamara Fox and Peter Matthews taking the next two places. Peter Matthews who hunts with the Hursley Hambledon, was competing in his first hunt ride.

“It was absolutely fantastic,” said Pete. “The whole day was brilliant, the course rode really well and if I could do it all again tomorrow I would.”

Watch the footage from Peter’s head camera above.