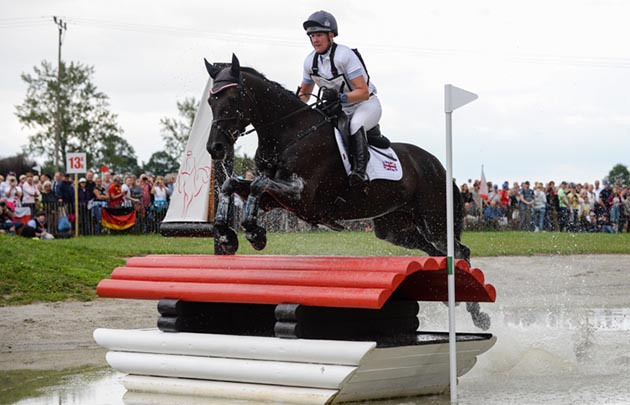 Great Britain has moved into gold position following valiant cross-country riding from all team members today at the European Eventing Championships in Strzegom.

Nicola Wilson (Bulana), Tina Cook (Billy The Red) and Ros Canter (Allstar B) all jumped clear around Rudiger Schwarz’s 30-fence cross-country track, which proved to be as intense and tricky as riders had predicted.

Nicola is the highest-placed Brit on the individual leaderboard in fourth, with Tina sixth and Ros lying eighth.

Nicola Wilson and Bulana secure the team gold spot for Great Britain after cross-country at the European Eventing Championships. Picture by Peter Nixon

“We had every belief in our horses’ cross-country performances,” said Tina, who was one of only four riders from 77 starters to achieve the 10-minute optimum time. “It’s a proper championship track but we’re a strong team and strong cross-country riders. This is a great place to be in.”

“It’s really exciting [to be in gold] for me and the whole of Team GB,” said Ros, who is making her senior championship debut. “There are a lot of people who support us and work tirelessly behind the scenes to get us here.”

The British team only has two showjumps in hand over Germany, though. The defending champions lost their grip on gold when their first rider, Julia Krajewski (Samourai Du Thot), picked up 20 penalties at fence 8b, a triple brush.

She later became a counting score when Bettina Hoy, top of the individual standings overnight, fell from Seigneur Medicott at fence 10, a wide table with ditch underneath. The pair had an uncomfortable round until then and had already picked up 20 penalties at fence 4c, a skinny brush.

Germany remains at the top of the individual standings, however, with Ingrid Klimke and Horseware Hale Bob out in front.

Ingrid Klimke goes clear inside the time across country on Horseware Hale Bob OLD at the European Eventing Championships 2017. Picture by Peter Nixon

Ingrid has no showjumps in hand over Michael Jung, who added nothing to his dressage score today and lies second aboard FischerRocana FST.

Michael, the defending champion, is bidding for his fourth European title. If he achieves it, he will set a new record for being the first to ride four different horses to individual glory.

Sweden has moved up to bronze, 5.5 penalties behind Germany, after all team members recorded clear rounds. Their anchor Sara Algotsson Ostholt (Reality 39) is also in contention for an individual medal, lying third overnight.

“It was good to go out knowing there had been three clears before me,” said Sara. “We have good showjumping horses in our team and we are hopeful of a medal tomorrow. A medal is what we’ve come for.”

There is a significant gap to the fourth-placed team, Italy, who are 49 penalties behind.

British individual Gemma Tattersall pulled off a gutsy clear aboard Quicklook V to remain in the hunt, a handful of time-faults good enough for fifth at this stage.

Irish rider Sarah Ennis has moved up to seventh from 14th after dressage following a stellar clear that saw her pick her up just 0.8 of a time-penalty aboard Horseware Stellor Rebound.

Ireland are out of the team running though following a fall for Austin O’Connor and Kilpatrick Knight, plus run-outs for Michael Ryan (Dunlough Striker) and Joseph Murphy (Sportsfield Othello).

Britain’s second individual, Piggy French, has also fallen well down the leaderboard after Quarrycrest Echo faulted coming out of the last water (24c).

Come back to horseandhound.co.uk tomorrow for full reports on the trot-up and showjumping. Full Europeans report in next week’s H&H (24 August).