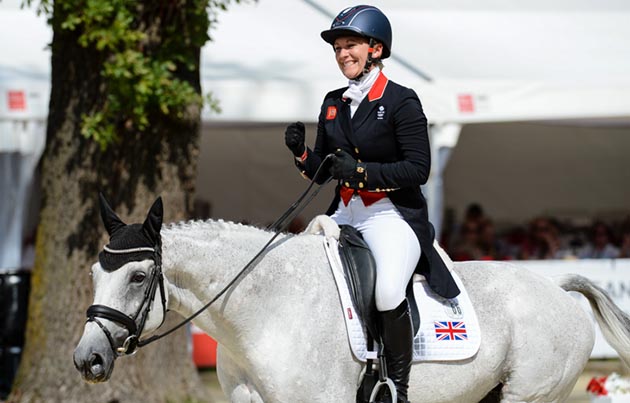 Germany has taken a commanding lead after two days of dressage at the European Eventing Championships in Strzegom, but the British team have given themselves a fighting chance of winning a medal.

The Brits are currently in third on 111.9, just 0.1 of a penalty behind the French. Germany, whose team riders currently fill the top three places on the individual scoreboard, is well ahead on 87.7 — a record score for this stage of a European Championship.

“This is a good position for us to start in,” said Ingrid. “We ride for the team first and we came to win. I know Bobby is capable [of winning individual gold] too and I will go for it.”

France’s best-placed rider is still Tom Carlile (Upsilon), sixth on 34.4. The nation’s final team rider Thibaut Vallette looked like he might get close to Bettina’s stand-out score with some strong-scoring trot work, but marks dropped in the canter for a final 36.1, good enough for eighth at this stage.

British individual Gemma Tattersall rode a spectacular test aboard Quicklook V to place them fourth and in the hunt on 33.1.

Gemma Tattersall shows her delight after a stellar test at the European Eventing Championships 2017. Picture by Peter Nixon

“My plan is to win an individual medal — that’s what we’ve come here for,” said Gemma. “I can ride for myself and not have to follow any team orders and go for it tomorrow on the cross-country as much as I can.”

Gemma Tattersall and Quicklook V during their test at the European Eventing Championships 2017. Picture by Peter Nixon

Nicola Wilson is best of the British team members in seventh with Bulana after scoring 35.1. Tina Cook and Billy The Red are in 12th, but in touch on 38.2. Ros Canter and All Star B lie 15th on 38.6, while Oliver Townend and Cooley SRS, who scored 43.8 yesterday morning, are just outside the top 20.

“That’s Bulana’s fourth personal best in a row,” said Nicola. “She’s such a feisty mare but she desperately wants to please. All we can do now [as a team] is concentrate on our own performance and see where that takes us.”

Cross-country kicks off at 11am (10am BST) tomorrow and riders will tackle 30 fences designed by Rudiger Schwarz. The optimum time is 10 minutes.

“It’s huge — very difficult out there,” said Nicola. “One, two and three are big but will hopefully get you into the course and then we come to four and oh my goodness. It’s up to us to ride with our heads and get the job done.”

Come back to horseandhound.co.uk tomorrow afternoon to see how the team and individual standings have changed after cross-country. Full Europeans report in next week’s H&H (24 August).