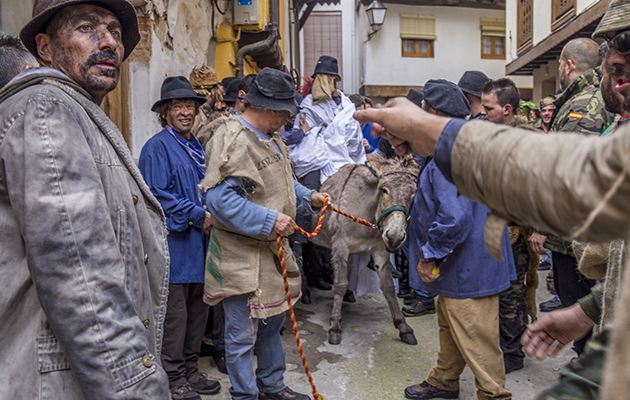 A charity is appealing for donkeys to have no more part in the “stressful, deafening and unsafe” Peropalo festival.

On Shrove Tuesday (13 February) a donkey will be “dragged” through the streets of Villanueva de la Vera, Spain, carrying a “fully grown, drunk man” as part of the festival.

The Donkey Sanctuary is calling for an end to the practice.

“The organisers of Peropalo claim its roots are from an event that took place in medieval times, when a rapist named Peropalo was caught and dragged through the village before being lynched in the town square,” said a spokesman for the charity.

“The festival — an outdated tradition that could be stopped by the regional government of Extremadura — is popular in the village and hundreds of people, most of whom have been drinking throughout the previous night, cram the tiny streets and join in the procession.

“It is deafeningly noisy and unsafe and has echoes of the machismo that characterises the Pamplona Bull Run. The procession takes about an hour, by which time most of the participants are intoxicated.”

The event is “highly stressful” to the donkey, said the charity, adding that it has supporting evidence of this.

“The donkey is crushed, pushed, pulled and falls frequently,” said the charity spokesman.

“In the a 2017 veterinary report, the vet notes that there was an increase in cortisol levels in the blood sample taken after the festival. Cortisol is a hormone released during periods of stress to allow the body to cope by redirecting energy resources into areas that are vital for survival.”

As recently as the 1980s, the donkey was often killed at the end of the event, but since the involvement of the Donkey Sanctuary, steps have been taken by the festival organising committee to address some of the welfare concerns – which included the donkey being kicked and punched and forced to drink alcohol.

This year the Donkey Sanctuary will be lobbying the government of Extremadura to change its law which currently protects animals from mistreatment under animal welfare legislation with the exception of festivities such as Peropalo, which are listed as “intangible cultural heritage”.

Video of the test, at a national US competition, has been widely shared online

Andre Agassi, Pancho Gonzales and Rafael Nadal are seeking homes after they were caught in a snowy tennis courts by

‘All the team here love him already’

The charity is asking supporters to sign a petition that will be delivered to the government to advocate for a change in the law https://www.thedonkeysanctuary.org.uk/peropalo.

“The regional government has the power to change this law and end the suffering of all animals that fall into this loop hole,” added the spokesman.