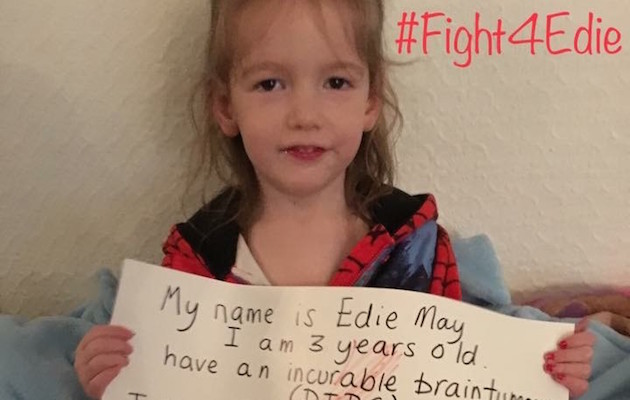 A little girl with a rare brain tumour has been awarded an honorary place in the Randox Health Grand National.

Edie Molyneux has been given the 41st place in Saturday’s (14 April) £1m chase.

The three-year-old, who has diffuse intrinsic pontine glioma (DIPG), has been given her own set of colours and will appear in the racecard to raise awareness of her condition.

Edie is supported by the Bradley Lowery Foundation, which was set up in memory of Bradley who passed away in 2017 at the age of five from Neuroblastoma.

Edie’s tumour is in the centre of her brain, so surgeons cannot operate to remove it and chemotherapy is not an option in the UK because her body would not be able to cope with the levels needed.

Edie’s family is aiming to raise £700,000 to cover the cost of pioneering treatment not available in the UK.

Her write-up in the racecard reads: “Making her Aintree debut, Edie loves walking in the park, playing with her puppy Ellie and gymnastics. But most of all she loves playing with her brother and sister and cuddles with Mummy and Daddy. Sure to make an impact, so will be well supported.”

Edie’s blue and red colours are inspired by her favourite superhero, Spiderman, who appears in the racecard as her trainer.

Her age is listed as is her weight,14kg, and her elder sister Niamh and younger brother Leonard are her jockeys for the day.

Edie’s mother Ashleigh Molyneux said the family’s world was crushed on 30 November 2017 when her daughter received the diagnosis.

“We were told by our doctors to go home and make memories with the family — but then we found hope,” she said.

“In Mexico, there is pioneering treatment that uses intra-arterial chemotherapy which is having good results and showing good progress.

“We’ve been in Monterrey, Mexico for three months now, leaving our family and friends behind.

“The most recent MRI scan from early March shows a small amount of shrinkage which is a massive step because we had been previously told that the tumour was stable and was not growing.”

Each round of treatment costs around £30,000 and the family does not yet know how many Edie will need.

Edie’s father, Stephen Molyneux, added: “Amazingly we’ve already managed to raise £200,000 so far which is a really good start, but there is a long way to go.”

Jockey Club Racecourses created the honorary 41st place ahead of the 2017 Grand National for five-year-old neuroblastoma campaigner Bradley Lowery, who died in July.

Gemma Lowery, co-founder and chief executive of the Bradley Lowery Foundation, said she remember’s last year’s Grand National “like it was yesterday”.

“Bradley had an amazing time and his daddy and I have got special memories to treasure for the rest of our lives,” she said.

“Aintree helped us to continue to raise crucial awareness by giving Bradley the 41st horse in the Randox Health Grand National and, this year, they are continuing to do that by supporting one of our children and the Bradley Lowery Foundation is helping to raise money for life saving treatment.

“We are very grateful and overwhelmed that Aintree is still supporting us as a charity and would like to thank everyone involved. Together we can all make a difference.”

One For Arthur leads over the last and wins the 2017 Randox Health Grand National Credit: Bill Selwyn

With the world’s most famous horserace taking place this weekend (Saturday 14 April), familiar faces from the horseworld give you

The charity is hoping to surpass the £700,000 target in order to help other children and their families in the future.

“We were honoured to welcome him to Aintree as the first ever 41st runner in the Randox Health Grand National last year,” he said.

“Bradley’s legacy lives on and we’re delighted to announce that Edie Molyneux, who is supported by the Bradley Lowery Foundation and a local Liverpool girl, will be the 41st runner in the Randox Health Grand National this year.

“We’re delighted to help in any way we can in order to raise awareness and support Edie in her journey.”