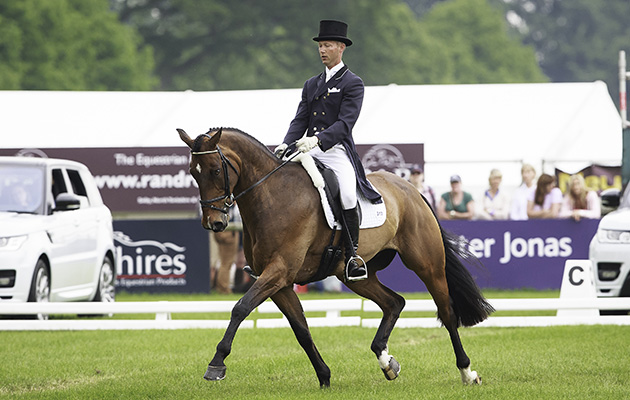 Clark Montgomery lived up to expectations by taking the lead after the first phase in the Event Rider Masters (ERM) class at the Equi-Trek Bramham Horse Trials today (10 June).

The US rider scored 36.5 for his test with Loughan Glen (below), a 13-year-old who belongs to Holly and William Becker. Clark has the Rio Olympics in his sights.

“It’s my last run before selection, so I hope everything goes well,” he said.

Clark admitted he was “hanging” today after “having a bit too much fun at a BBQ last night” and put his error of course in the walk down to this.

“It probably helped with my relaxation,” he said. “I thought I heard the bell, but I was a bit foggy and I didn’t think I’d gone wrong so I just kept going.”

Riders choose their own dressage background music in this class — which is live streamed and aims to raise the standards of presentation in eventing. Clark rode to a medley of Israel Kamakawiwo’ole songs, Somewhere Over The Rainbow/What A Wonderful World.

Both the top two horses are by Limmerick — Australia’s Bill Levett holds second with his own and Clare Prentice’s Shannondale Titan on a mark of 39.

“We had a bit of a disaster in the ERM at Chatsworth when I didn’t give him enough work and he was taken aback by the atmosphere,” he said. “I gave him 45 minutes warm-up today, although we were walking for half of it as I knew he’d had enough work and was going to stay with me. When you have a horse who’s such a good mover it’s nice to do him justice.”

The leaderboard in this class has a truly international look, with six nations in the top six places. China’s Alex Hua Tian lies third on his own Don Geniro,

“He’s changed a lot this year — we’re used to floppy Don as he used to be over chilled,” said Alex. “At Chatsworth he took us by surprise so we’ve changed his management in terms of his warm-up. We’re not quite there yet but he has limitless scope on the flat.”

“Everything is easy for him,” said Maxime. “Sometimes he can worry about everything around the arena, but now he’s got enough experience to stay quiet. He knows his job.”

New Zealand’s Mark Todd sits in fifth on NZB Campino. Nicola Wilson is best of the Brits in sixth with Annie Clover.

Bramham is the second leg of this big money series, which is new this year. France’s Astier Nicolas won the first leg at Chatsworth and sits 12th on Molakai after dressage here.