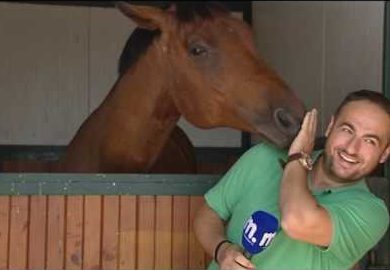 A friendly horse interrupting a television report has gone viral on the internet.

A Greek reporter is filmed standing in front of a bay horse’s stable, and the gelding is clearly interested in his surroundings.

The male journalist starts to speak to the camera, but is interrupted by the nosy horse nuzzling his head.

The gelding, referred to as Frankie during the video, continues to interrupt the reporter and at one point appears to nibble at his ear.

“It’ll eat my ear!” the journalist exclaims in Greek.

The equine star of the clip later takes a drink and dribbles water close to the reporter, who is left in hysterics.

The bulletin speaks about the magic of horse racing, and then goes on to discuss dressage.

However, the reporter doesn’t get beyond the first few lines before having to start again.

“Fine, fine, come on Frankie!” he says, having to give up and start again after several attempts.

The video was originally shared on Facebook by Greek radio station Rythmos FM.

Since then the footage has been circulated on social media and generated over one million views.

The humorous video has been popular on H&H’s equine blogger Hovis’ Facebook fan page, We love Hovis and his Friday diaries on H&H.

“I so needed a laugh, brilliant,” said Bridget Hatcher.