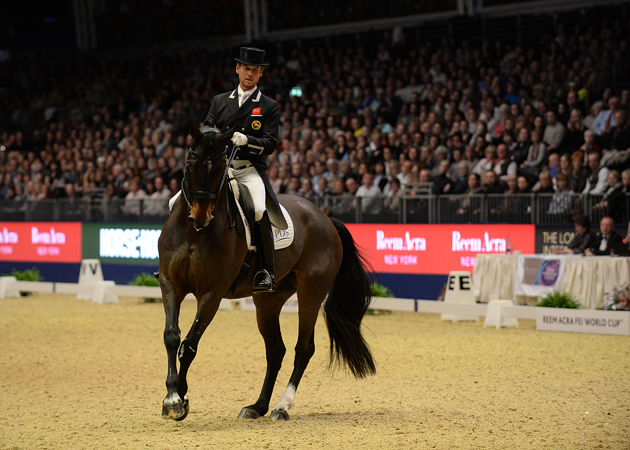 Their new routine was daring, carrying a very high degree of difficulty, but the 11-year-old Don Ruto gelding pulled it off with flair. The first centre line especially made the judges sit up in their seats, with a full piaffe pirouette, passage and a double canter pirouette all featuring before the pair reached C.

“I’m pretty ecstatic,” said an emotional Carl. “It was hard enough for ‘Barney’ to go round the edge of this arena last year, let alone do the test, so it’s incredible what a year can do.

“The horse isn’t blessed with the best physical attributes, but has a very good brain, so I decided to put together what I thought were the most difficult things we could do.”

If you love Olympia, then you shouldn’t miss this…

The freestyle results reversed that of Tuesday night’s grand prix, with Charlotte Duajrdin having to settle for second with Carl Hester and Sasha Stewart’s Uthopia. Charlotte scored 82.55% for Valegro’s How To Train A Dragon programme, coaxing a fluid and expressive performance out of the 14-year-old Metall stallion.

“If there is one person to be beaten by it’s Grandad. He did a cracking job – watching him out there tonight gave me goosepimples.”

Dutch rider Hans Peter Minderhoud scored 80.97% with Glock’s Flirt to finish third for the second night on the trot. The pair bettered their winning freestyle score from Stockholm last month by 0.02% to secure a personal best.