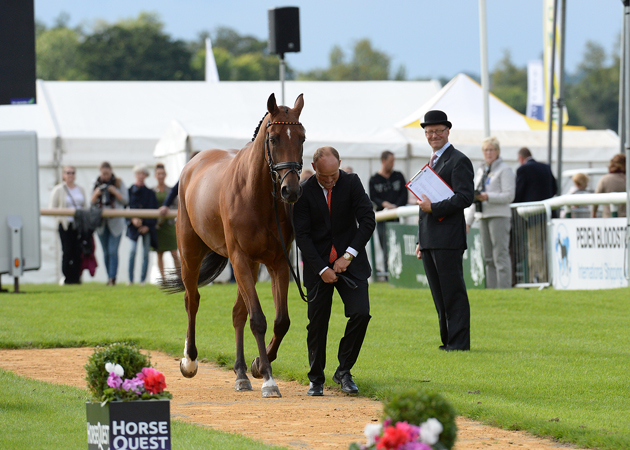 All were accepted but not all were nodded through immediately.

Willa Newton and her ride Newmarket Vasco One were asked to trot twice before being sent to the holding box. Upon re-inspection the 15-year-old, previously competed to four-star level with Willa’s sister Chloe, was accepted.

The other horse to be sent to the holding box was Matthew Heath’s ride, The Lion. The pair who were spun at the first trot-up at Badminton Horse Trials earlier this year, breathed a sigh of relief as they were also accepted upon re-inspection.

Horses that were asked to trot twice by the ground jury included Under The Clocks (Murray Lamperd), Cornacrew (H&H blogger Simon Grieve), Donner (Lynn Symansky) and Coolys Luxury (Tom Crisp), but all were accepted without being sent to the holding box.

Some style was on show at this initial trot-up. Andrew Hoy and Georgie Spence were awarded with the best dressed male and female awards.

Statement jackets were the order of the day with regards to ladies’ fashion, whereas beautiful shoes and sharp suits were a common theme between the men.

The one major wardrobe malfunction at this year’s first trot-up was when reigning Olympic and European champion, Michael Jung, realised as he presented his second horse, La Biosthetique – Sam FBW that his trouser flies were undone (see picture below) much to the amusement of the spectators. Unfortunately for Michael, he had already presented his first horse, FischerRocana FST, before he realised his mistake.

The first horse into the dressage arena will be Oliver Townend on the first of his three rides, Dromgurrihy Blue, at 9.30am tomorrow morning.

You can keep up to date with
all of the action at Burghley live as it happens courtesy of H&H Live while videos of each rider will be available on demand shortly after they perform on Burghley.tv