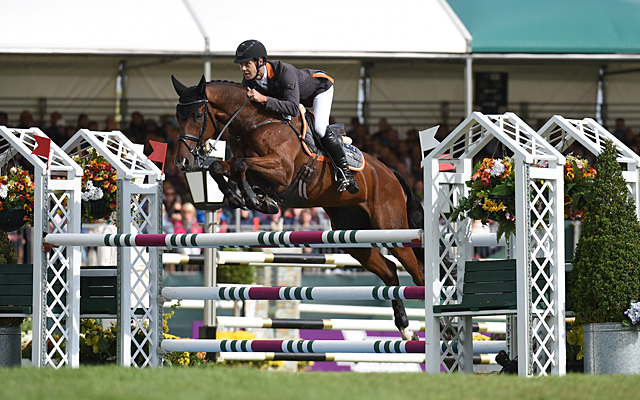 Australia’s Chris Burton won his first British four-star this afternoon at the Land Rover Burghley Horse Trials — but ended up cutting it much finer than expected.

By the time the 34-year-old entered the arena he had four fences in hand, but Nobilis 18 started to rack up the faults at the second part of the double at fence four. He then also knocked the first element of the treble at eight, the gate at 12 and the final oxer.

“He warmed up ok — of course he was a little bit flat, but he’s basically careful, so I was expecting him to go well,” said Chris. “But in the end he got a bit tired and had a few down.

Chris said that even in his wildest dreams he didn’t expect to lead this competition throughout.

“On Wednesday I walked up Winners’ Avenue and saw all those old boys’ names and thought how amazing it would be to have your name on a plaque one day,” he said.

It is more than 25 years since a rider won Burghley with as many four fences down.

Chris finished on 49.4 with his own, Sue Lawson and Carolyn Townsend’s Nobilis 18. One more fence down would have handed victory to New Zealand’s Andrew Nicholson, who finished on 53.2 with one down and two time-faults. This is the third time Nereo has finished second at Burghley.

The final showjumping over Richard Jeffery’s track was expensive for a lot of riders, partly because the ground was sticky as good weather today dried it up after yesterday’s rain.

Jonelle Price claimed third with Classic Moet for New Zealand, up from fourth overnight. She had four faults for knocking down the upright in the middle of the treble at fence eight.

“The track was more technical than we’ve seen here for a few years,” she said. “The terrain on the cross-country is is always influential here and you notice its influence with the top ones in the showjumping who’ve gone faster than the rest of the field. But the horses felt surprisingly good this morning so I think it was more that it was a more difficult track than we’ve had recently.”

Oliver Townend was the best Brit in seventh with a clear on Sue Chadwick and Komfi’s Samuel Thomas II, while Tina Cook took 10th riding Star Witness, who just had the gate down. Sarah Cohen (Treason) was 12th and the next Brit was first-timer Becky Woolven in 17th, with the endearing Charlton Down Riverdance.