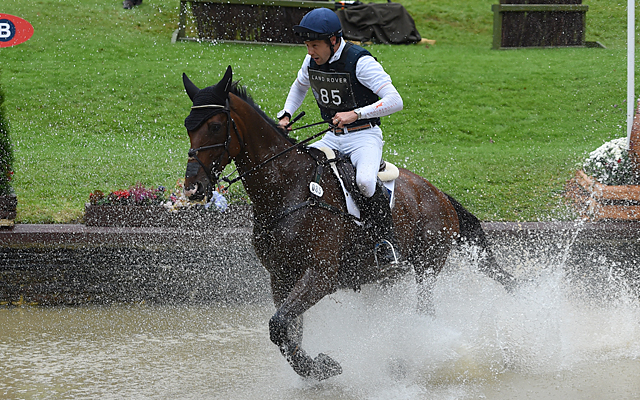 Chris Burton is well ahead of the opposition after cross-country day at the Land Rover Burghley Horse Trials.

“I was very nervous today,” he admitted. “I sat in the rider’s tent and watched a heap of horses and riders and that didn’t help! Then I went back to the truck and said to my wife, ‘Shall we just curl up in bed and have the afternoon off?'”

The Australian rider had a fabulous, forward ride round Mark Phillips’ cross-country track on his own, Sue Lawson and Carolyn Townsend’s Nobilis 18. He finished with 3.2 time-faults to add to his leading dressage score of 30.2.

“The distances came to me and he’s an easy horse to ride forwards to a fence,” added Chris, who had planned to take the long route at the final element of the Land Rover Trout Hatchery (fence 21d) but changed his mind to go straight as he was so far down on his minute markers in the early stages of the course.

Although Chris has won Adelaide CCI4* twice, but is bidding for his first British four-star victory.

Chris Burton and Nobilis at Burghley 2016. Picture by Peter Nixon

It rained for most of the day today, but the ground on the track held up well and did not unduly influence the competition.

New Zealand’s Tim Price holds second after his six time-faults elevated him from seventh after cross-country with Ringwood Sky Boy, the runner-up here last year. The horse belongs to the rider, rider, Robert Taylor, Varenna Allen and Selwood.com. Tim was making amends for a fall on the flat with the horse in Rio.

“I was excited after riding my first horse,” said Tim, who had one stop on the less experienced Bango. “He’s more of an unknown quantity and it was an educational round, while I know this horse inside out, he’s gone well here before and I was looking forward to riding him. He coped well with the ground, grew a leg when he needed to and got a second wind when he needed to.”

Tim’s compatriot Andrew Nicholson is in third with Deborah Sellar’s experienced Nereo, who had 12 time-faults but retained his dressage position.

“My time-faults weren’t to do with the ground — basically I just didn’t go fast enough,” he said. “I’ve always had a soft spot for this horse. [Triple Burghley winner] Avebury was lovely to ride and very gentle; Nereo is a big striding horse and has always found everything a bit harder. But I’ve lugged him all round the world and whenever he’s had to come up with the goods he’s done so. It felt like he was reading the numbers for me today.”

Nobody made the time today. Tim’s wife Jonelle and Classic Moet were the fastest, finishing four seconds over the target. They were also the speediest pair at the 2014 World Equestrian Games. Their prowess earned them a rise from 22nd after dressage to fourth.

Bettina Hoy is fifth for Germany after 19.2 time-faults with Designer 10 and Mark Todd is sixth for New Zealand on Campino, who had 16.8 time-penalties.

Oliver Townend is the best British rider in ninth with the second of his three rides, Sue Chadwick and Komfi’s Samuel Thomas II. The horse has 9.6 time-faults.

Oliver could have grabbed second with a fast round on his last horse, MHS King Joules, who was the final challenger on course. But things came slightly unstuck when he missed the corner at the Land Rover Trout Hatchery (fence 21bc) and took the long route, although he was judged not to have crossed his tracks and was unpenalised. But he then had a run-out at the hedge bonnet at Discovery Valley (fence 24c).

‘Harder work than I expected’

The cross-country proved extremely influential. From 68 starters, 40 finished the course and 28 had jumping clears, while designer Mark Phillips said the aim would be for 50% of starters to jump clear.

“It was harder work for the riders than I thought it was going to be,” said Mark. “The combinations required forward riding on the way in and the leading three riders did that better than anybody else.”

Mark said he was disappointed with the number of falls — 12 (seven unseated riders, five horse falls) — and felt there were a number of instances where riders were thrown forward on landing at fences and paid the price, but that others were unlucky.

Among those who were particularly unfortunate was Sam Griffiths, who was eighth after dressage with Happy Times, but had to pull up due to his stirrup breaking early on course. His fellow Aussie, Andrew Hoy (sixth after dressage on The Blue Frontier), was one of those who fell on landing in the water at the Land Rover Trout Hatchery. Brits Pippa Funnell and Olivia Wilmot also came to grief here, although neither got a soaking.

Australia’s Paul Tapner was taken to hospital with a possible shoulder injury after a fall with his first ride Up In The Air at Herbert’s Hollow, but nothing was broken and the horse was reported to be back in his stable eating hay soon after the accident.