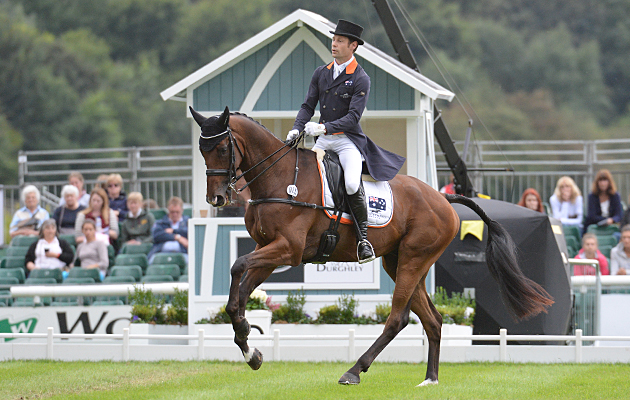 Chris Burton is leading after the dressage at the Land Rover Burghley Horse Trials.

The Australian rider was the only person who could get ahead of last night’s leader, Germany’s Bettina Hoy, today. He scored 30.2 this afternoon with his own, Sue Lawson and Carolyn Townsend’s 11-year-old Nobilis 18.

“I was happy he let me ride him in the test, he felt relaxed,” said Chris, who collected an Olympic team bronze last month riding Santano II. “Nobilis has done some lovely tests before, but you never know [what mark you’ll get]. It’s exciting to be in front of these guys [Bettina and third-placed Andrew Nicholson].”

Chris Burton and Nobilis 18 at Burghley. Picture by Peter Nixon

Bettina, who is 4.3 penalties behind Chris, said she expected the Australian to go ahead of her.

“It was a beautiful test, technically so well ridden, and the mark was well deserved,” she said.

“Nereo is not the most naturally gifted in the dressage — he’s a big, powerful galloper, rather than a horse for confining in a little box — but he’s 16 years old and has had a lot of training and been to a lot of events,” he said.

“He’s a pleasure to ride and I know he’ll focus, not be distracted by the crowd or the flowers, so he makes my job easy.”

Oliver Townend is the best Brit in fifth with MHS King Joules, who was third at Bramham CCI3* earlier this year.

Oliver rides three horses at Burghley and King Joules is the last runner in the field, which will make for an exciting end to the day on tomorrow’s cross-country.

The next best home side rider is Sarah Cohen, who holds 11th with Treason.

Looking ahead to tomorrow’s cross-country, Chris said he thinks Mark Phillips’ track will be a challenge.

“Burghley is always big, tough and relentless,” he said. “I think he’s an excellent course-designer. I’m looking forward to having a go, but I wouldn’t say I’m excited about it!”

Re-live today’s dressage and follow tomorrow’s cross-country from 11.15am with H&H Live