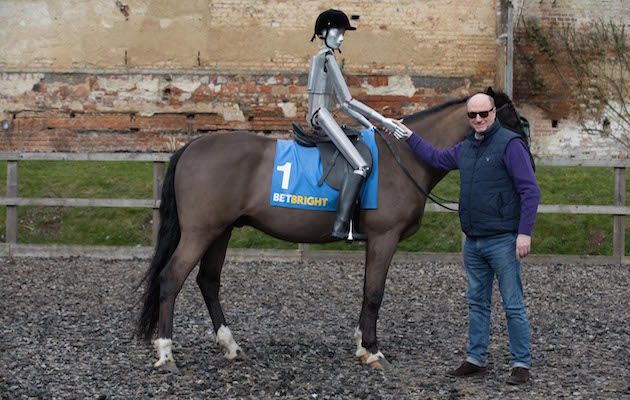 Bookmaker BetBright paid for a lightweight steel robot to be created, following a report by futurologist Dr Ian Pearson.

BetBright took the device to the Centre of Horseback Combat, where it was attached to a horse, who cantered around an arena and jumped a small fence.

The creepy spectacle raised concerns among social media users about the ethics surrounding the idea.
However, while BetBright is claiming the robot can ride and jump fences — the reality is a little different.

Karl Greenwood, co-founder of the Centre of Horseback Combat, explained the team did extensive work ahead of the stunt to gradually introduce the horse to a similar robot-like dummy.

The dummy was dismantled and the team introduced it to the horse bit-by-bit, gradually putting it back together on the horse.

“We started off by desensitising the horse, with the legs, then his middle, the top half and then added the arms and the head,” Mr Greenwood told H&H, adding the key is getting horses used to unusual situations.

BetBright’s robot also comes to pieces, meaning the team were able to assemble to use the same strategy.

The jockey was partially built into the saddle and while the balance sensors were operating, its arm movement mechanism was not switched on.

Horses at the centre are also trained to take part in stunts and trick riding for displays at shows and for film and television.

“This particular horse is happy to run around and jump on his own,” added Mr Greenwood.

“Robot jockeys are coming. They aren’t going to look like that, they are going to be surcingle and pads.

“They will be able to push a horse with a consistency that a human cannot do.”

‘Robots and further advancements are also possible, however, whether it will be adopted by fans up and down the UK

And could you even make a bit back, as well as being healthier?

He added for training purposes, the robots will be able to give horses consistency in training and will not make errors in the way humans do, such as jabbing a horse in the mouth.

“A horse will spook and a rider will change what they are doing,” he said.

The robot, which can hold a conversation with a human, will be at Cheltenham Festival on 16 March at the BetBright area next to the parade ring.