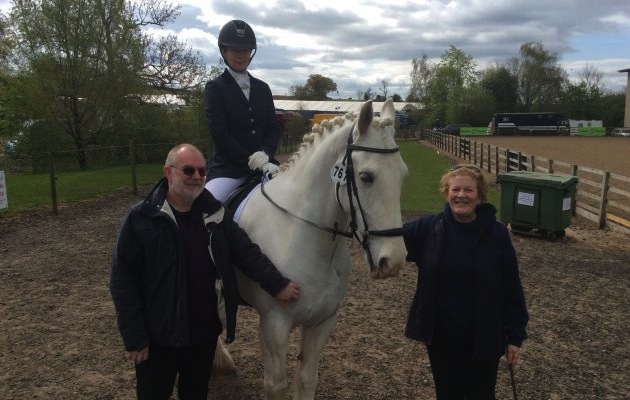 “He has that Pokémon streak — that is what makes him so special,” said owner Elli Moug of her prelim bronze Area Festival finalist Silver Barton.

The immaculate 15.3hh Gypsy cob produced a rhythmical first round test to score 70.35% and secure a place in the final, despite a horse jumping onto the boards with a crash in the neighbouring arena.

Elli, husband Terry and rider Alix Henderson are based an eight-hour drive away in Edinburgh.

Alix and “Sammy” stayed with Justine Sole at AM Dressage in Gloucestershire for the week running up to the championships.

“I was very pleased with him because he was quite a handful in the arena walk this morning,” said Alix.

“He took a dislike to the British Dressage banner in particular – all the others were fine!”

This is the first major championship for the 10-year-old gelding, who Elli bought around seven years ago.

“He was 14.2hh when I bought him as my retirement pony,” explained Elli, who named him after he farm her great-grandmother grew up on.

“I bought him as a ‘four-year-old’ but when I got him off the lorry he spat out a baby tooth, so we reckon he was closer to two-and-a-half.

“Alix is my instructor – she sat on him one day and said ‘do you realise what you have bought’. He has just gone from strength to strength.”

Horse & Hound brings you stories with a

Affectionately nicknamed “The Hooligan” at home, he is known to chase sheep and bangs his door for attention, but “loves” people and is great with children.

They are now focusing on his lateral work and are hoping to move up to medium later this year.

“He is talented with a great work ethic and always makes me smile,” said Alix.

The combination scored 66.67% in the final, finishing 20th overall.

For a full report from the British Dressage Winter Championships and Area Festival final – as well as news, views and expert comment – don’t miss Thursday’s (20 April) issue of Horse & Hound