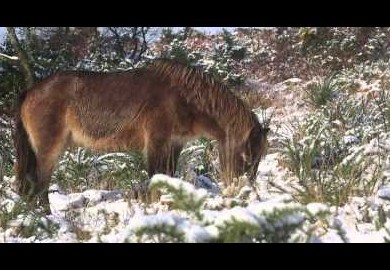 Catastrophic events during World War Two meant that by the end of the war there were just 50 of the hardy Exmoor ponies left — a culmination of owners being away at war, ‘trigger happy’ troops training on the moor and ponies being stolen for meat.

As a result they are classified as endangered by the Rare Breeds Survival Trust and in a new video made by The Exmoor Pony Society, breed expert Dr Sue Baker explains some simple precautions we can all take to make sure they thrive for future generations:

If you are visiting Exmoor…

1. Do not try to feed the Exmoor ponies

“It’s very important that people don’t try to feed Exmoor ponies because we need to ensure that they maintain their wild abilities to use the natural food plants. The moment they start to associate food with people, it places them at risk from vehicle accidents, but it also means we start to compromise their ability to live out freely,” says Sue.

2. Do not leave gates open

“Maintaining the genetic diversity of Exmoors is critical and the breeders have their individual breeding programmes that are aimed at making sure the gene pool is managed and the various family lines are continued,” adds Sue. “All those breeding programmes rely on the fact that their ponies will be in a set enclosure not mixing with other ponies, and so all of this can be completely wrecked if people leave gates open.”

Ahead of Lingfield Park's heavy horse fixtures, Horse & Hound's Garry Ashton-Coulton took one of the Shires for a spin

3. Be careful when you’re walking with a dog

This is particularly important in the spring/early summer when there are heavily pregnant mares and young foals that can be upset by a dog startling them.

Every year ponies are killed in road traffic accidents, either dying outright or having to be put down as a result of their injuries. Foals can often be the casualty of these accidents because they’re oblivious to traffic.

Find out more about Exmoor ponies at www.exmoorponysociety.org.uk