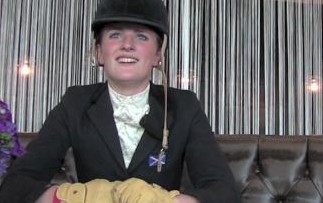 Horse of the Year Show (HOYS) working hunter pony champions Philippa Weir and Freckleton Maximus didn’t have the most successful start to their HOYS career, when they parted company on their first attempt in this class two years ago. Since then, however, they’ve gone from strength to strength, winning at the BSPS Summer Championships, picking up a third at Hickstead, and successfully eventing at BE90.

Philippa describes winning the championship at HOYS as “crazy”, something she never expected. “It’s literally gone over my head – maybe tomorrow it will sink in, but right now it seems nuts”. And she’s not even thinking about Sunday’s supreme championship battle yet – tonight’s celebrations will come first.

Having just started at Nottingham University, studying physiology, Philippa credits her mum for doing “a lot of the work” to get ‘Max’ ready for the 153cm class at HOYS – she only arrived last night.

She first saw the 15-year-old gelding several years ago with his owners, the Brewster family. “As a kid, he was always my favourite horse”, gushes Philippa. “I was always saying to Caroline, ‘please can I have him when you’re finished?’.”

Caroline approached Philippa at a party three years ago to ask if she’d like to try him, and the rest is history.

“He’s lovely at home, so nice in the stable, but he’s just as feisty as he is at shows so it can be quite hard to get him to chill out. He’s used to the atmosphere here, but it gets to his head – you should see how much cotton wool is stuffed down his ears!”

“It was a good track, but it was tough for him,” explains Philippa. “The striding in the doubles was quite short and he’s got a massive stride. But he was just springing, he felt amazing.”

The reserve went to winners of the 143cm class Jodie Creighton and Derrygimbla Atlantic Storm. This partnership hail from Northern Ireland and qualified for HOYS at the Royal Highland Show, having already stood champion at Dublin this season.