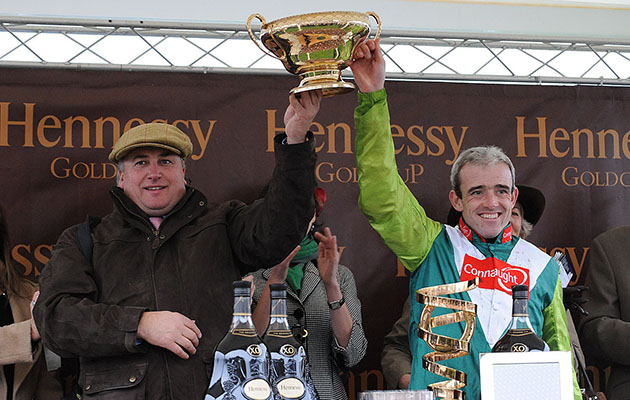 The six-year-old gelding will come up against 16 other rivals on Saturday (28 November) in the three-and-a-quarter mile handicap chase, worth a record £200,000. He will be partnered by Paul’s first jockey Sam Twiston-Davies, under a top weight of 11st 12Ib.

The Somerset-based handler, who has lifted the champion National Hunt trainer title an impressive nine times, has an outstanding association with the Hennessy Gold Cup — both in the saddle and as a trainer.

“To have ridden and trained winners of the Hennessy Gold Cup, I obviously feel very privileged. It’s just amazing really and I never dreamt that would happen — I feel I’ve been incredibly lucky,” says Paul.

How many of these facts did you know about the prestigious race?

His first training victory came in 2003 with Strong Flow before the unequalled Denman romped home twice to win in 2007 and 2009.

Paul and his great rival Nicky Henderson hold the record, out of racing’s current trainers, for the most wins in the prestigious race — having notched up three triumphs each. Only the great Fulke Walwyn has won the race more times as a trainer.

Before turning his attention to training, Paul also claimed double victory in the Hennessy as a jockey. First in 1986 riding Broadheath, despite a mistake at the third last where Paul got thrown forward out of the saddle.

“I remember jumping the last and the roar from the crowd was absolutely incredible. To win was phenomenal — I never thought I’d ever be good enough to ride horses like that,” he says.

A year later, he returned to Newbury to take another Hennessy win aboard Playschool in 1987. With fellow jockey-turned-trainer Andy Turnell, the two men are the only two in the race’s history to have won both as a jockey and then as a trainer.