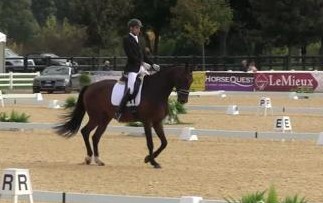 H&H catches up with Jack Boarder at the National Dressage Championships at Stoneleigh, about his (mostly) 'quiet and reliable' six-year-old Charisma IV

More often than not, he’s really quiet and reliable, but every now and then on a random day he’ll be quite spirited to turn out or ride, and it catches everyone off-guard. I often get messages from the girls at the yard saying “your bloody horse!” They call him Princess Rizzmond Fairydust, but I refuse to use that. At Sheepgate under-25s, he scratched his bum on his stable and took the whole door off — I came back to his stable to find someone holding him outside!

What are your plans with him now?

To get him qualified for novice regionals and then crack on with elementary and getting him into a double bridle. I’m going to start taking him over to Emile Faurie once a month, just for another pair of eyes.

Watch Michael's winning test with Half Moon Dynasty, plus read a round-up of other winners from day one of the

Have you had any setbacks?

A few weeks after arriving with me this time last year Rizz got colic after a training session, and had to have surgery. He was on box rest for two months and had to be off until February to recover. When something like that happens, the first thing you do is blame yourself and wonder if it was something you did, but the vets assured me it could have happened at any time for any reason. At first I was upset about it and cried when talking to [trainer] Keith Robertson, mostly because it seemed so unfair for the horse. Sometimes now I think about where we could have been without that setback, but at the end of the day that’s just horses.

It’s my first time here, but it would have to be this. It’s one of those times that being “proud just to have got here” isn’t a cliché, it has such a heightened importance, especially in his first season competing.

How has it been starting out as a professional?

When you’re starting out, it’s so easy to feel you have to spend the money on a really flashy horse, so of course sometimes I’ve doubted him. When he came back to work in February, he jumped out of the arena in the first test, and scored over 70% in the next one. At the regionals, Wendy Filtness wrote a comment saying “quality horse with masses of promise and potential” which reminded me that actually he is quite nice and will be lovely! He’s just so big and weak that we’ve had to take it slowly — he was advertised as 17.2hh but is clearly about 18.1hh and still has growing to do. I’m really excited about him, but I’m just so impatient.