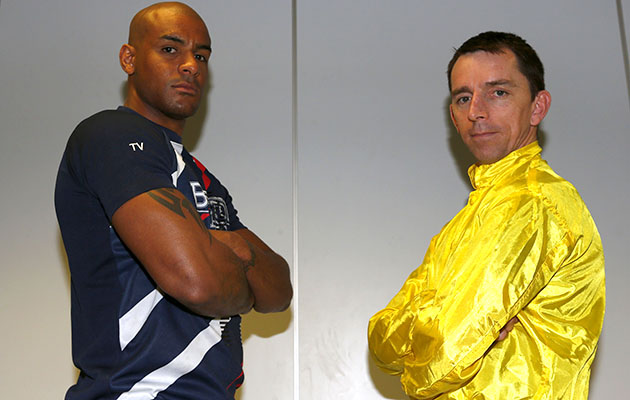 What happens when two highly competitive athletes go head-to-head? In the name of research, dual Grand National-winning jockey Leighton Aspell took up the challenge against Bristol Rugby Club player (and record try-scorer) Tom Varndell. See them both in action below.

Jockey Leighton Aspell and rugby player Tom Varndell embarked on four physically demanding exercises that tested their aerobic fitness, power and isometric strength at Liverpool John Moores University — including a VO2 max test, a vertical power jump, a plank and a wall squat (pictured, below). Eurghh! Those of us at H&H headquarters feel tired just at the thought of it…

The study was conducted under the watchful eye of leading sports scientist Dr George Wilson, who has worked extensively with jockeys — helping riders improve their performance through targeted diet and fitness plans.

“The difference in the physical requirements of a jockey to that of a rugby player are obviously quite stark given that fitness is sports-specific — muscular endurance for a jockey versus power, strength and speed for a rugby player,” says George. “However, despite the physical difference between them, some of the tests were closer than you would expect.”

“Leighton is an excellent example of the ‘jockey athlete’ and I’d encourage other jockeys to take a leaf out of his book — there would not be many who could match his level of fitness and conditioning.”

Describing Tom as a “tough competitor”, Leighton added: “I’d say that my general fitness levels were above average based on the amount of exercise I do — I ride horses every day and if I am not I will head to the gym or go running.

“I was really pleased with the results and I thought it was a really interesting exercise to compare the abilities from two different sports.”

The rugby player may have been twice the size of the Irish jockey but some of the tests still pushed him to his physical limits.

“Leighton is incredibly fit and it took all my competitive nature to keep with him on some of the tests,” said Tom. “I am a big fan of horse racing and this has given me a renewed appreciation for how tough and resilient the riders are.”

This is a gauge of the maximum volume of oxygen that an athlete can use during physical exertion. It is measured in millilitres per kilogramme of body weight per minute (ml/kg/min).

Leighton and Tom were placed on a treadmill running at 8km/h with the incline of the treadmill increasing by 2% every two minutes.

This test is a physical fitness test that is used to demonstrate power in the lower body. The main goal of the test is to measure how high an athlete can jump from a standing position based on their explosive lower limb power.

Another isometric assessment, it is a simple fitness test of core muscle strength. The plank test measures the control and endurance of the back and core stabilising muscles.