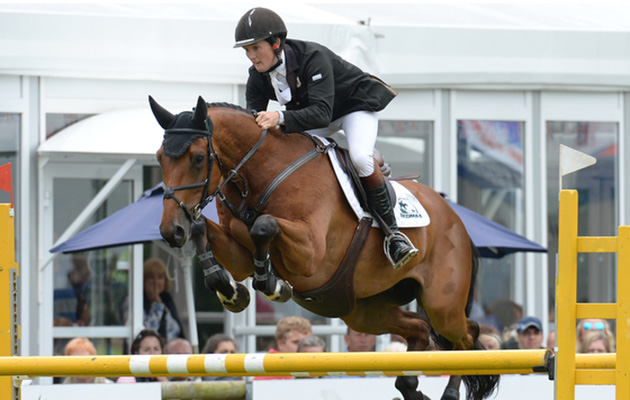 There were no showjumping clears and by the time Tom and Toledo De Kerser, owned by Jane and Frank Inns, went in to jump they had two fences in hand. They used one up with the first part of the final double down, but it didn’t matter — Tom still won by 4.5 penalties.

“It’s his first fault at an FEI show and he’s such a class jumper it was my own fault, so I’m more annoyed about that than anything,” said Tom.

Tom is the first person to win this class twice as he was also victorious in 2013 on Diesel.

Bert Bolton was second overnight with the ex-racehorse Purple Sands, but had a catastrophic round today, knocking down six fences to drop to 10th.

Sam Ecroyd and Wodan III faulted in the same place as Tom but still moved up once place to finish second.

“My horse was jumping really good, but coming round to the double I was slightly conscious of time,” said Sam. “I turned quite tight and was short of power, then I put too much in on the last stride and got a bit of a flat jump. It’s a mistake I’ll try not to make again.”

Emily Prangnell and DHI Beaunesse’s four faults earnt them a rise of two spots to third.

“I originally planned to do the CIC, but she went so well at Belton we decided if Chatsworth went well we’d do this class — the goal was to complete,” said the CCI3* debutante.

Full report on Bramham in H&H this week, out 16 June.