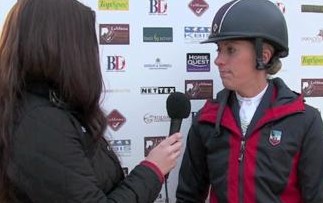 Charlotte nursed the nine-year-old Barolo round his first freestyle, riding to Valegro’s popular How to Train Your Dragon music, to post 76.8%. Combined with her 72.9% score from yesterday – only the horse’s third grand prix – this secured her the national champion crown for the first time in her illustrious career.

“I feel quite emotional actually – I didn’t expect Barolo to come here and do this,” said Charlotte, of the Breitling W gelding who is owned by Carl Hester and Ann Cohn. “We got him when he was six and he had literally done nothing. He picked up everything very quickly, but has lacked confidence.”

The national title was the icing on the cake for Charlotte, who had earlier piloted her own and Wendy and Paul Dockley’s Florentina to victory in the Shearwater Potential International Dressage Horse five-year-old championship. She also stood reserve champion in the four-year-old final aboard Emma Blundell’s Totilas daughter MSJ Top Secret, behind Judith Davis’ Hawtins Duchessa (Decamerone x Don Frederico) and Amy Woodhead.

“Flora is so light, easy and adaptable to ride – I’m very excited about her but I need to remind myself to take my time with her,” said an animated Charlotte, whose victory in this final clearly meant almost as much to her as the grand prix titles. “It’s great to win on one of my own, who I can make my own decisions with. I can’t wait.”

First-drawn Zoe Sleigh and the eight-year-old Dark Legend 54 claimed the Equine Construction advanced medium open championship, in which just 1.3% covered the top eight. Zoe, who is trained by Michael Eilberg, bought the Duino son as a two-year-old, and this is only his first year of serious competition.

A high quality Nettex elementary open went to Laura Wollen and her own Woodlander Buddy Holly, who posted an impressive 76.28% to snatch the top spot from Sadie Smith and River Rise Escarla.

“I only bought him in April, but I saw him as a young horse and his walk and canter were phenomenal then,” Laura enthused about the Burlington eight-year-old, who was bred by Lynne Crowden. “We’ve spent time strengthening him and he was amazing today. I’m so excited about him.”

Don’t miss the full report from the 2015 Lemieux National Dressage Championships, in Horse & Hound, out 24 September