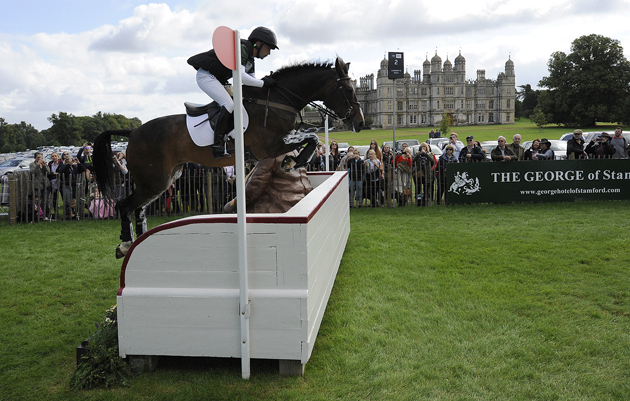 What can I say? My ultimate hero, Bozzie Buckley (Cornacrew) was superb today, jumping clear round Land Rover Burghley Horse Trials CCI4* for the fourth time.

I woke this morning, and thought to myself, “When on earth did you think entering this was a good idea, Simon?” As I think is natural and understandable I felt decidedly nervous, but pulled myself together to go and say good morning to my boy. There was no one around at 6am, so I could have a quiet moment with him and he gave me that look as if to say, “It’s today, isn’t it, Dad? Yippee!” He knows the drill.

After taking him for a leg stretch, I walked the course with Jeanette Brakewell and John Bowen. I’ve walked Burghley with both of them every year that I’ve ridden here and every year they fill me with confidence. I came back from my walk feeling enthused and excited for what lay ahead. I can’t thank them enough for their support.

I had a shower and got changed while Kathryn began getting things ready. It’s wonderful having her here as she is so experienced and as a general rule is around five steps ahead of me. I got on about 40 minutes before I was due to run and took the boy for a stroll down the gallop field and then went to give him a jump in the collecting ring.

At 11.40am we jumped out of the start box. The crowd was huge around the Lion Bridge and I think it caught us both a bit off guard, which meant we didn’t have the best passage through, so I decided to play safe out of the Anniversary Splash with the longer route. He nipped through there and powered over the enormous Slate Mine and through Capability’s Cutting like the pro that he is.

Simon Grieve and Cornacrew at Burghley 2015. Picture by Peter Nixon

I’m not going to lie, I missed, and missed good at the biggest fence on the course, the Cottesmore Leap. I gather there was very little oxygen left in the CCTV tent with all the gasps. But my hero being himself got us out of trouble and powered over the skinny beyond.

He jumped superbly through the Land Rover Dairy Farm and Rolex Combination. He was jumping his socks off, but began to tire as we approached the Land Rover Trout Hatchery so I took a couple of longer routes to nurse him home. He never lost his jump and I was encouraging him all the way.

He finished well, albeit with a lot of time-faults, but is very content now. He’s been wanting to go across country all week, so I think he’s had his fix.

I got to watch Jeanette, who did the most amazing job with Bella (Lets Dance). They truly are a class act and my goodness they should be on a team.

I find myself lost for words, and wanting to say all kinds of gushy things about how amazing our wonderful horse is, but nothing could possibly describe just how special he is to me. I’ll just reiterate what Jeanette and John tell me off for (tongue-in-cheek that is) which is after pretty much every fence smiling and saying, “I love you Bozzie”.