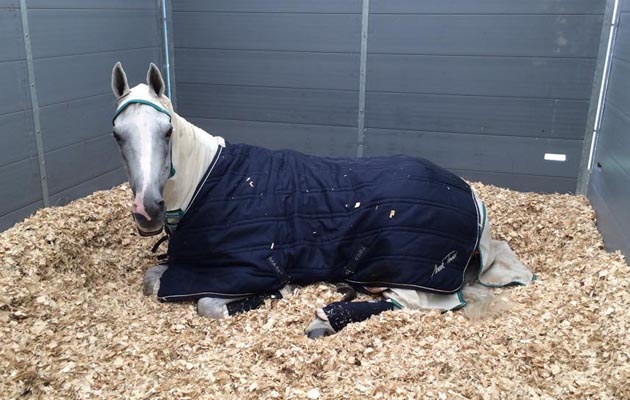 We’ve had a relatively relaxing day here at the Land Rover Burghley Horse Trials with time to catch up with friends, family and I have actually made a start to my Christmas shopping. The trade stands here are amazing, so I’m looking forward to coming back to the lorry with more bags tomorrow.

Bug’s lovely owner, Sheila Jones, has arrived along with her son Stephen. Bug was originally bought for Stephen to ride – he is 6’5 which explains why Bug is also on the taller side.

My sister, Tricia, and her two girls arrived as part of our support team for the week. Anna is holding a Team Dalton chocolate cake she’d made and although Lucy was hobbling, she still managed to Team Daltonify her crutches!

Nana’s sister, Tricia, and her daughters Anna and Lucy

I spoke to my other sister, Fuzzy, this morning. She is recovering well after her double mastectomy and is hoping to be home by this evening. She will be resting up following Burghley on the internet and TV.

This morning I had a really good flatwork session with Yogi [Breisner] and we were happy with how Bug is going. He can sometimes get in a muddle with the flying changes, but he can do all the movements very well so we’ll just trying to pull out our A game for our test at 9.46 tomorrow morning!

I’ll be getting on him again shortly, just to wander up to the main arena for some familiarisation of the surroundings and atmosphere… and then will be getting our glad rags on for the drinks party in Burghley House this evening. The Event Horse Owners Association then put on a dinner, which I’ll look forward to heading to with Sheila and Stephen tonight.

It won’t be a late one as we’ll be getting focused for my dressage test. I think Candice was training me in her sleep last night as a 2am she was saying “leg, leg, leg…!” She is right though, we’ll be needing to do that in our test … and even more going cross-country on Saturday!!