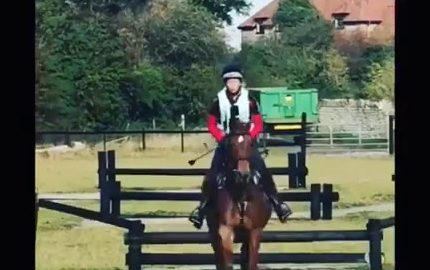 So that’s another eventing season completed for Team Keen and I cannot thank everyone involved enough for such a great year.

As always there have been ups and downs, but I am feeling very lucky with how things went overall.

Being able to represent Team GB again out in Strzegom with my top man Wellshead Fare Opposition was a real highlight. Looking towards the rest of the horses, they have all in their own ways made really good progression this year.

April (Total Belief), has been incredibly exciting making the move up to CIC3* level as an eight-year-old and taking it all in her stride. The other one to watch is Quintessential III, who had a fairly faultless year ending up with a top 10 placing at the five-year-old championships. But all the horses have had great moments with lots to look forward to for next season.

It has also been a good year in terms of welcoming new owners and sponsors. Eventing is impossible without their generous support and I am so grateful to all my backers new and old for all they do to make it all possible.

Since the Team Keen season completed at Bicton (which was such a fantastic event — thank you so much to Helen and the whole event team), we have had a bit of down time to focus on the young horses.

It is my pleasure to introduce the new ‘ginger generation’ of Total babies, who are both by Wish Upon a Star. First up is Juno (Total Freedom). I really like this mare and she has had a great four-year-old year so far.

Since this eventing season finished, I have had more time to take her out and about. Along with my working pupil Alice and her lovely four-year-old, we headed out to their first cross-country schooling session recently, and both horses were great. As shown by the video at the top of this post, I nearly had to have my parachute on going into the water for the first time(!), but overall, I was so impressed with Juno’s attitude, she felt like a real natural and gave me a great feel.

Last Friday was another big moment for Juno, as we took her on her first solo trip to Your Horse Live, to take part in a lecture demo with Corinne Braken. This was quite a big ask for a four-year-old with lots going on. As we were heading up to the main arena, we timed it just as the Mountain and Moorland class were finishing and heading back to the stables. The mare’s eyes were out on stalks! And then she had to go into the indoor, with lights, cameras and an audience looking at her. However, she was amazing, staying with me throughout and was so brave.

You will see in the video below how she grew in confidence. Once we finished, we let her stay and relax in the arena and watch Jake Saywell jump some decent fences, which again she did in a totally relaxed manner — what a special young horse!

I cannot wait to keep going with Juno’s education. We are starting to think that she may be a good one to syndicate, so if she is of interest, do get in touch with me for more details.

Milly admiring herself in the mirrors

Next up (another chestnut mare!), is three-year-old Millie. We brought her in at the end of the summer and she has taken the whole backing process in a such a laid-back lovely manner. I really enjoy starting the young ones, working them out and being there right from the start. Especially when they are as easy as Milly has been! Hopefully her good work will continue through the winter — I will let you all know how we get on.

My first sit on Milly

Away from eventing, it was lovely to spend an evening at the Hannah’s Willberry Wonder Pony Ball. The evening raised just over £35,000 for the charity which was fantastic for such a worthwhile cause.

Leaping Lord with his owner Margaret Cuff at Bicton

Last week I also got the chance to get away for a couple of days and headed out to Dubai. I was lucky enough to get the opportunity to do some teaching out there at both Al Habtoor and Emirates Equestrian Centre. It was a great experience with lovely people and horses, and something I would love to do again.

So, I think that is all from me for the moment. I still can’t quite believe another season is over, but its been a good one — thank you again to everyone involved in Team Keen for making it happen.