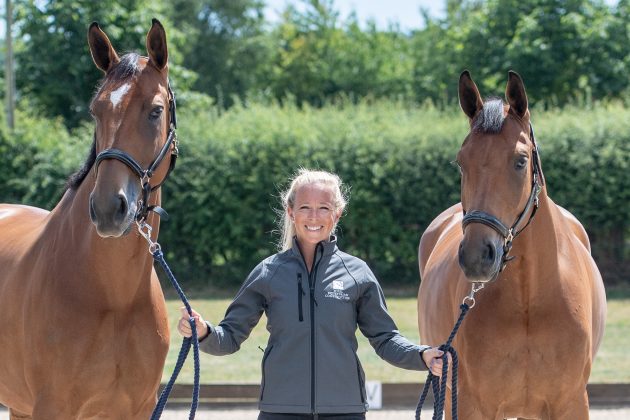 Breeding horses is renowned for being a difficult game. I adore all our Total horses, but definitely didn’t order one to come out at 18.1hh! That being said, we have had some major milestones with our home-grown lot recently, so I thought for this week’s blog I could attempt to link up the family trees of the small breeding operation that goes on here at Glebe Farm.

I think I have to start with Total Belief, our first home-bred. Born on 1 April (hence the stable name April), she came into the world as an enormous windswept foal. We had never seen offspring so big, so the fact that she couldn’t stand was not ideal. It was a huge Team Keen effort to hand rear this XL filly for the first two weeks of her life, and we were all very relieved when she successfully came out the other side.

April is out of a 16.1hh National Hunt mare, who has thrown us some very big horses (the 18.1hh one mentioned above, Total Darkness, is out of the same mare). April is also on the tall side at 17hh+, but with her generous nature (her huge ears were always an indicator of that), she has been amazing to produce.

It is always a nice feeling when a home-bred comes out and wins their first event as a five-year-old and we haven’t really looked back with her since then. This season has been no exception and it was a special moment when April successfully completed her first advanced at Aston last week (see video above). As an eight-year-old I was really impressed with how she went. Blenheim’s eight/nine-year-old CIC3* class is now firmly in our sights.

Oh and I also forgot to mention that this mare produced a foal for us aged three, Total Miracle, aka Leo. He is now out eventing as a five-year-old and I adore him. I don’t think that many people make the connection between mother and son. As shown by the picture below, they are definitely similar types. But there is no love lost between April and her boy. While trying to take the photo below, she continually tried to savage him. Motherly love…

Now to move on to the super-sized 18.1hh black beauty of the yard Total Darkness (Ted). I am loathed to make him big headed, but this seven-year-old is pretty impressive to look at and seems to catch the eye. Having said that, I don’t think he quite realises how beautiful he is and completely lacked confidence as a very young horse. He was the spookiest one yet and we had to take everything incredibly slowly. However, time and patience was well worth it and we now seem to be reaping the rewards. He has notched up five top 10 places this season and will imminently be moving up to intermediate.

Ted is by Wish Upon A Star, as is Total Freedom (Juno). Unlike our mother and son duo mentioned above, Ted and Juno are polar opposites; black tall gelding versus small chestnut mare. But both great types in their different ways.

Quintessential III (Chilli) is another lovely five-year-old on the yard, who is out of the same mare as Cascadelle (Lola). I wrote in a previous blog earlier in the year of how upset I was when Lola went wrong again, so I feel very lucky to have her close relation to compete. Chilli has taken to eventing like a duck to water and we were all really pleased when she qualified for Osberton five-year-old championships at Tweseldown. However, she has also got a mega naughty mark against her name for being the only horse I have ever had to be evicted from on-site stabling! After copious apologies to the Rockingham stable manager, I did eventually manage to get her reinstated, but I am praying that there will not be a repeat of this at her next stay away!

Coral has represented Great Britain eventing in Poland, but unfortunately it didn’t end the way she imagined it would

A huge part of why I do horses is the amazing time I have producing them from scratch. There is nothing I enjoy more than seeing them come into the world, letting them grow as youngsters, breaking them in and then taking them out. We have a few two- and three-year-olds who I can’t wait to get going. It is such journey and no two are ever the same.

With my two- and three-year-olds. Credit: William Carey

I feel like the first crop of Total horses are now beginning to come into their own which I am so excited about. In the short term, there are big plans for the pioneers; Total Belief and Total Darkness, but it is a continuous cycle and hopefully we have the next set of stable stars waiting in the wings.