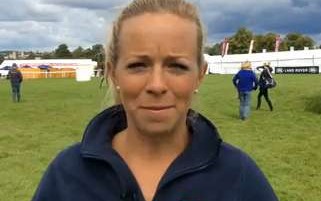 I hope I can show that tomorrow rather than go in to the dressage arena and have to play it safe because he feels tense. We’ll see, but I am pretty positive; I just hope he doesn’t light up because he’s so delighted that all these people have come to watch him!

Derby having a stretch

I did some work this morning and he was really good. Then this afternoon I polished up a few things in the arena. It’s too late for training as such and I don’t want to work him and make his muscles sore. He’s got a lot to do and it’s a long way until Sunday evening so I’ve been working him as much as he needs without overdoing it.

He had a pick of grass up at the main arena this evening for familiarisation. He’s still feeling plenty perky enough. Some tape on the floor caught his eye and he

Derby having one of his many rolls

soon whipped around. He’s sharp as he’s fit and feels a million dollars and I actually think he thinks he’s worth a million dollars! He keeps trying to sneak a cheeky roll while he’s grazing too which means he’s still quite chilled.

Yogi Breisner walked the course with me today which was great. I’ve made a few more decisions and some bits are starting to look a bit better. It’s interesting because sometimes you walk a course and it gets bigger and bigger as the day comes closer and sometimes it starts to feel less daunting. Today it feels slightly less daunting but much more real!

Phoebe curled up in her basked near Derby’s stable

A few more decisions have been made about the routes I am going to take. I’m lucky that I am quite late on Saturday as there are a couple of fences that I don’t know quite how they will be read by the horses. It’s the same with the time too. If the horses are coming home tired I’ll look after him a bit more.

I watched Michael Jung’s test this morning and a couple of others too. It’s good to be able to do that and see how the judges are marking. It won’t affect my plan, it’s just useful to get my eye in.

Now I am off to the cocktail party which is held at the house in the garden. It’s really nice to go to and very special to be able to go inside an amazing house like that. After the cocktail party, the Event Riders Association have their awards dinner, although I probably won’t stay until the end as I will need to get my head down.