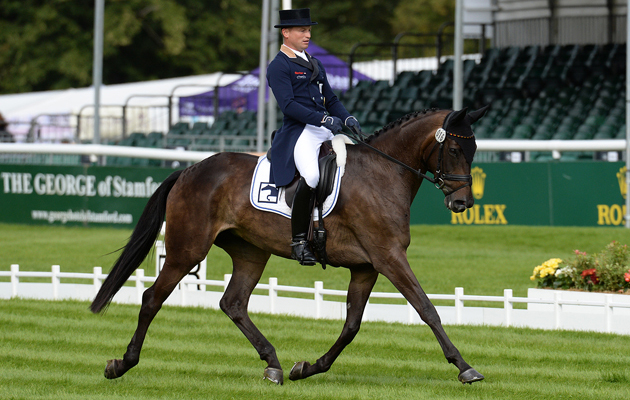 Michael Jung leads after the first day of dressage at the Land Rover Burghley Horse Trials.

The German superstar scored 34.2 on his parents Brigitte and Joachim Jung’s FischerRocana FST, by Ituango.

“She’s not so experienced at doing dressage on grass and when you do perform on grass, it’s not often as good as today — it was soft, but with good grip,” he said.

“That was nearly the best test we can do on grass — she was relaxed and concentrating. I was able to do everything the way we worked on it beforehand.”

Michael makes his Burghley debut on this mare — winner of Kentucky this spring and of the individual silver medal at last year’s World Equestrian Games — and on his 2012 Olympic champion La Biosthetique-Sam FBW. Sam performs at 3.25pm tomorrow.

Australia’s Andrew Hoy sits second on his own Rutherglen, on a mark of 37.8.

Andrew Hoy and Rutherglen at Burghley 2015. Picture by Peter Nixon

Andrew compared the standard now to when he won in 2004 on Moonfleet and put the result down to a team effort.

“Moonfleet was an elegant thoroughbred, bred to race and I had to sit still and not throw him off balance in all phases,” he said. “The competition has moved on so far from what it was just 11 years ago. The quality of dressage has moved on enormously.

“I know the test I rode today is better than what I did in 2004. Part of that is about me being focused on my riding and improving. I’ve also started working with Fairfax with their saddles and bridles and that has helped my dressage performance with all my horses.

“I also have regular help from Gareth Hughes [British dressage rider and Australian eventing dressage team trainer]. The success of any horse and rider is about the complete support team — even the groom I have now, Avril Smith, didn’t know a lot when she joined me, but she has the best attitude of any groom I’ve ever had working for me.”

Andrew said he remembered sitting in the press conference when he came to his first Burghley with Davey in 1979, aged 20, and won it — he said it was a good omen as Niklas Bschorer, who sits third now, is also 20 and making his debut.

The German scored 39.2 with his father Tristan’s Tom Tom Go 3.

“I’m very pleased with him, although there are still a few mistakes which we hope to sort out over the winter,” said Niklas, who is the youngest rider competing.

“He knows all the movements, so we have mostly been working on keeping him relaxed, his outline, paces and submission. It’s a case of getting the best out of him on the day and I think we did that today.”

Rosalind Canter is best of the Brits in fourth on Caroline Moore’s Allstar B. She scored 40.2.

Full report from Burghley in next week’s H&H, out Thursday, 10 September — 17 pages of photos and analysis, including columns from Ruth Edge, Lucy Wiegersma and Mark Phillips.